An Interview with Ben Bell on Pets/Unleashed dated June 3rd, was released and quickly taken down from the German Gaming website Computer Bild Spiele. Seeing as it was dated 4 days prior to 2011’s E3 event on June 7th, we should expect to see some more information surfacing soon.

Thanks to Infinite Sims for the Cache’d image of the German interview, & Sims Slovenia for the translation.

The new expansion pack brings certain four legged creatures into The Sims 3 world. The expansion pack producer explains, what we can do with dogs, cats and other animals. In The Sims world, everything is possible. Why didn’t the beloved animals get their needed attention is unknown. But The Sims 3 Pets will correct this mistake and place the player in a role of the furry creature. Every pet owner will tell you, that living with cat or a dog is nice, but Ben Bell now explains more about controlling your cats and dogs.

COMPUTER BILD SPIELE (CBS): How did you get the idea for the new Sims exp. pack? What role do the players have in this? Do you perform tests or have test audiences, or do you come up with ideas internally?

Ben Bell (BB): We always do what our fans want and we try to enable them to experience new things in our game. The idea for The Sims 3 Pets was simple. We love pets in the Sims Studio and we often talk about our pets, so it makes sense that we will enable our Sims to play with the four legged creatures, just like us.

CBS: Tell us more about the game. What can the fans expect?

BB: For the first time in the history of The Sims series, player can take control over your pet and live his story. We always want to know, what Fido or Fluffy think, when we come home late from work or when we take them on a walk around the park. The game enables us to do that and the pets also have traits, so that players can create their own, perfect pet – just like their Sims.

CBS: Will the game enable controls with speech or movement?

BB: Xbox 360 will enable players with Kinect to use voice control. Imagine, how it would be, when your Sim-dog would sit down, when you would say “Sit”! Voice control works with normal Sims as well. We’re really excited about this feature, because it is really fun!

CBS: What pets will the players be able to play with and what kind of control can we expect to have over them? Can players create their own pet-families?

BB: Xbox 360, Playstation 3 and Nintendo 3DS offer players dogs and cats, that they can create however they want and they can choose from various breeds. PC/Mac version contains dogs, cats and also horses. Horses are new in the game, and we are really excited about it. For many years, players wanted to have horses in the game. Xbox 360, Playstation 3 and PC players can create their own pet-family, but they always need a human Sim to watch over them. 3DS owners can create their pet-families without any human Sim.

CBS: will the game work with or without the base game? 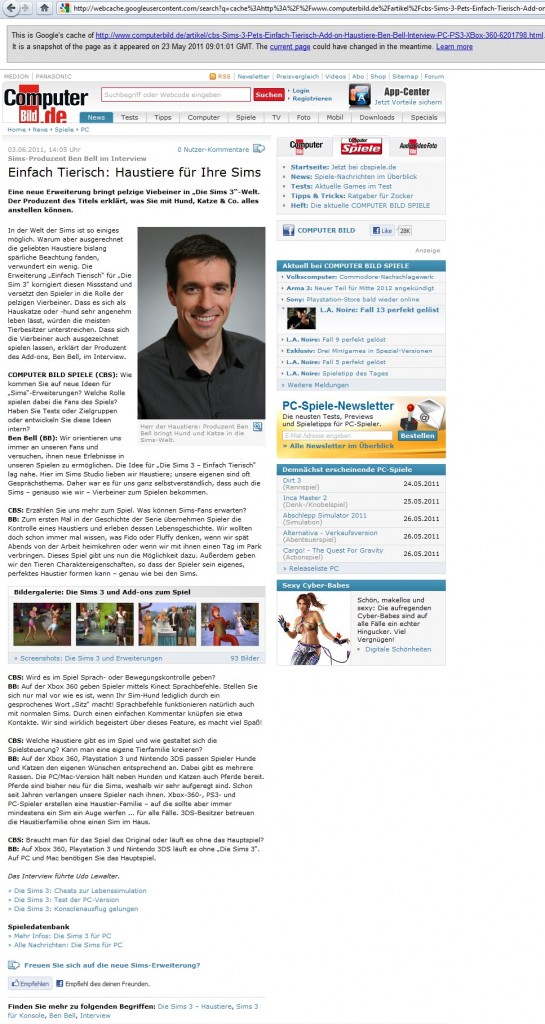