Well here is something I’ve been looking forward to!  The Pet Ghost!  It’s great to see that we will be able to interact with them even after they have passed on.  IGN has an awesome PC vs Console Preview with some new info!

Pets on PC/Mac is a proper disc expansion much like World Adventures or Late Night. There’s a new town and obviously the addition of pets.

The Sims 3 Pets for consoles is a separate disc game, complete with a new town and full set of Achievements and Trophies. Karma Powers are back with some new tricks, like one that turns all animals in the area feral and another that allows you to turn a pet into a human and vice versa. Another nice addition is that when your pet meets Death you can control its ghost until it completely passes on or you revive it. There’s also a new feature – the Mystery Journal – which includes five puzzling situations (each mystery has multiple steps) to solve with some help from your furry friends. Finally, you can use Kinect’s voice commands to control your Sims. Phew! That’s a lot of stuff. 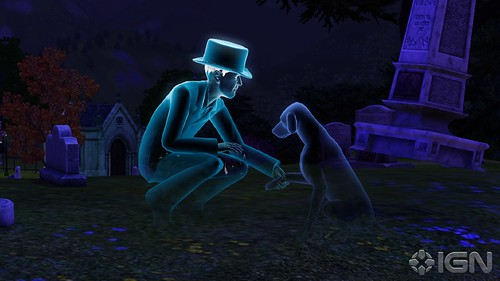