Sims Nieuws has posted up their Preview of Sims 3 Pets!  Head over and check it out!

During the presentation there were already a lot of questions answered by simply looking at the demos they did, the PC demo, there were some technical problems (crash), but they were quickly resolved. Because of this, we first see the splash screen also received, it is a light bluescreen with different animal footprints. 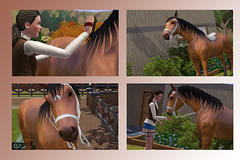 But as to start the animations in the demo we saw were amazing, EA has spent a lot of time studying the movements of animals, and these are very well absorbed in the game, we both looked amazed. The little details, like the wobble of a tail or a leg movement makes the game very realistic eyes. Nicole Jenkins began by showing a female Sim who rode horses, after some difficult movements, she was finally on the beard, and the two began to drive. On the lot, which is very much a farm road, was a racing track for the horse. And of course the producer showed how it was jumping into his operation, again a beautiful animation, and fun to watch. Especially when your Sim is wrong for the first time to the seat or back of your horse goes down, your sim should really learn how he / she must learn to prepare a horse. This will not just happen by itself! Appaloosa Plains run into a lot of wild horses, which in itself should find out if you catch them or not. Nicole Jenkins did not quite sure anymore.