During the presentation in Milan of The Sims 3: Animals & Co., we chatted with Graham Nardone, Assistant Producer of EA who spoke, in particular, the PC version of the game, leaving the console Producer Ken Ogasawara . Here’s what we expect from this new chapter in the popular series created by Will Wright over 10 years ago!
The first thing you notice about The Sims 3: Animals & Co. is without doubt the great difference between the console version of the game and the PC. What is the reason for this choice?
The choice depended on a number of factors: on the one hand we wanted to develop a game that was best suited for each platform, on the other we have also followed the suggestions of those gamers. In the PC version, for example, found this large neighborhood, which is a big difference compared to The Sims 2, but was allowed by the type of system where we were going to develop. At the same time, our fans have asked us to play with the horses, and from there was born a combination that I personally feel great. Now you can go out riding his horse and do many things. In the console version we tried to create a gaming experience more driven, where the player must unlock the achievement, there is a story and you have to collect objects to achieve goals. 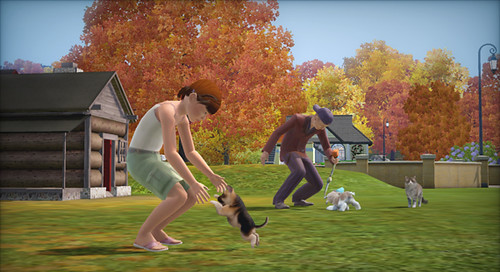 Thanks to SimCookie for the find!