Yes The series evolved a lot since the release of The Sims 3, with a city completely free and without barriers, almost without the annoying loading screens. Nevertheless, the Sims formula has always been the same. Create a family, a house, and evolve, employment, relationships, and life, trying to keep everything balanced – or not. It seems that the year EA tries to repeat the same formula, but in every generation of the series Yes this formula is innovated with the expansion packs.

Pets to the game brings back the much loved pets, for the third time, and still a hit. After Sims Open Season and The Sims 2 Pets, The Sims 3 Pets innovates further by bringing various animals the series Yes, that had never been added to it. In addition to the beloved dogs and cats, horses, an animal more requirements to the game since the second generation simulator lives, was finally added to the game, and with it many new features in other animals. A new city was also added to the game, Appaloosa Plains, and quiet country town. This expansion pack has not failed to follow tradition, and a new magical creature was added to the game, the unicorns. All these innovations will be presented below in an analysis written by the staff of The Sims Style, copy it, give the credits. 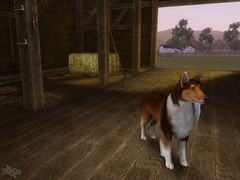