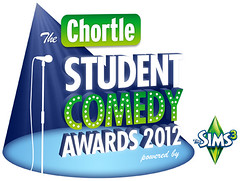 Chortle’s annual hunt for the best student comedians in the country has been launched today – powered by The Sims 3.

The new sponsorship deal with the award-winning series of games means the prize fund has more than doubled this year, with £2,500 for the winner and £500 for the runner-up.

Last year’s winner, Adam Hess, 22, said: ‘It was such an honour to win the Chortle Student Comedy Award; especially with it being judged by such well respected industry professionals.

‘The competition helped me enormously with my comedy career and it can help you come on leaps and bounds, even without necessarily winning.’

Chortle editor Steve Bennett said: ‘We’ve seen some great acts come through the competition over the past eight years – and admittedly a few shockers too – and we can’t wait to get on the road to see what this year might bring.’

Claire Ridley, The Sims 3’s marketing manager, added:  ‘We’re absolutely delighted and proud that The Sims 3 is able to be involved with the Chortle Student Comedy Award – this is a fantastic initiative with a rich heritage of discovering new talent.’

Twelve heats will take place around the country in February and March, followed by semi-finals in May and a grand final at the Edinburgh Fringe in August. Each heat will feature a top circuit compere, and include the chance to win prizes on the night.

Entrants must be in full-time education and have five to seven minutes of original material. Use the links above to enter and for the full rules, or follow the competition on Twitter:@studentcomedy or tweet using the hashtag #studentcomedy

If you’re new to The Sims 3, a 20-minute playable demo involving an Egyptian pyramid, a haunted house and vampire nightclub is available here.