Creating the worlds of The Sims 3 is an exciting process. It takes many talented people and a lot of work to turn a single idea into an entire world. Teams of model makers, concept artists, designers, directors, and animators expand a simple concept into buildings, hairstyles, and everything in between. Together, they create the distinctive looks of The Sims 3!

It all starts with a basic idea for the game theme from the production team, such as “pets” or “world adventures.” These ideas are usually selected from a much longer list of brainstorm concepts and thoroughly researched to determine what to create next.

When the basic theme is finalized, it is sent to the conceptual art department. These talented artists create the visual language that will define and represent the theme on screen. They start with photographs and images to create several trial looks for the Sims’ new world. The artists sketch out these initial ideas using “style guides” and “room views:” graphic dioramas of settings from the game that express the essence of the theme. 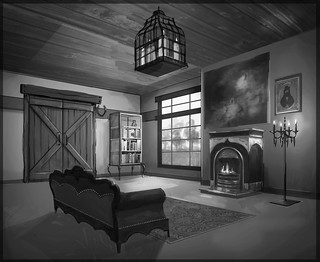 Sometimes, the best elements from multiple themes are combined to make the look you see on screen. For The Sims 3 Pets for PC/Mac, the concept art team knew they would have to create an environment that was as suitable for animals as it was for humans. They decided on a farm setting, but what kind of farm would it be? The two room views above each represent a distinct vision of how Appaloosa Plains, The Sims 3 Pets neighborhood, might look. Elements from both styles were eventually combined to create the final aesthetic for the game. 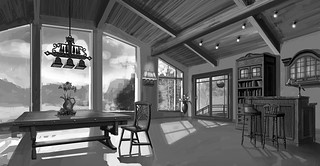 The style guides and room views are presented to the art director who is responsible for selecting the final stylistic approach and ensuring that the objects and designs, from buildings to bow ties, are consistent within the overall look of the game. Once the look has been settled upon, the model makers step in and turn two-dimensional art into the 3D renderings you see when you play The Sims. 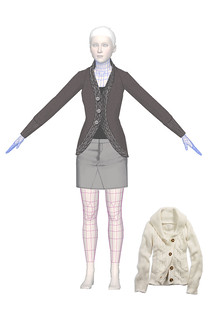 The inspiration for this outfit was the actual cardigan sweater pictured in the lower right.

Model makers from the “character” (clothing and hair) team to the “world building” (buildings and terrain) team work with the designers and animators to craft the general environment, as well as create objects that move and interact with Sims. Again, everything must be checked and double checked by the art directors to make sure that it looks great and makes Sims feel right at home! Finally the objects appear in the new environment that has been created for them. It is a process that takes several months and several teams of people all working together, but the result is a complete world with a seamless, natural feel for you to explore, discover, and play with life! 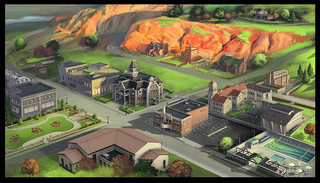 Finally the objects appear in the new environment that has been created for them. It is a process that takes several months and several teams of people all working together, but the result is a complete world with a seamless, natural feel for you to explore, discover, and play with life!