In this game, werewolves embody strength, passion and unbridled emotion, combining human tenderness with beastly power and a heavy dash of unpredictability. In The Sims 3 Supernatural, you can live as werewolf Sims, striving to balance a life of relative normality with the dramatic effects of the werewolf’s curse.

Werewolf Sims possess the ability to morph between human and werewolf forms, whether by will or an uncontrollable feral transformation spurred by low mood or the rise of the full moon. With the conversion into werewolf form, the nose widens and nostrils become more wolf-like, the bottom canines grow and the ears point back. Hair grows wilder and fuller, with the eyebrows becoming bushier and more aggressively sloped. Textured fur appears on the hands, feet and shoulders. Last but not least, large claws extend from the fingertips. 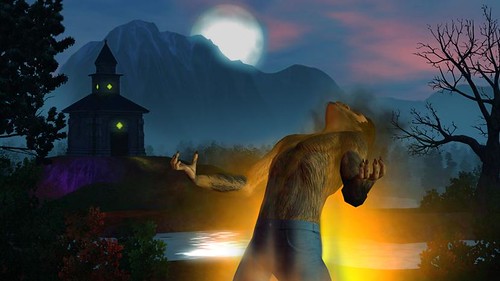 While physically intimidating and prone to inappropriate behaviours, werewolves also possess a great sense of honour, restraining them from recklessly spreading the werewolf curse. As werewolves become more comfortable with their primal nature, they will develop their lycanthropy skill, reducing their uncontrollable transformations and increasing their hunting prowess.

While their unpredictable nature can make dating difficult, werewolf Sims do possess a certain tenderness in their hearts. They can have children with fellow werewolves or with other Sims, with a 50/50 chance of producing werewolf offspring when mating with a non-werewolf. Werewolf toddlers demonstrate some animalistic behaviours, including howling, scratching and practicing hunting. As children, they will begin to transform between human and werewolf forms. As teenagers, werewolf Sims take on all of the benefits and drawbacks that are associated with this supernatural lifestyle.