Via The Sims 3 Community Blog


Mike True is a jack of alltrades – sometimes a modeler, sometimes a texture artist, and always a builder.He created the terrain in Lucky Palms as well many of the lots. Mike, can youtell us what it was like to work on the lots in this world and which ones areyour favorites? 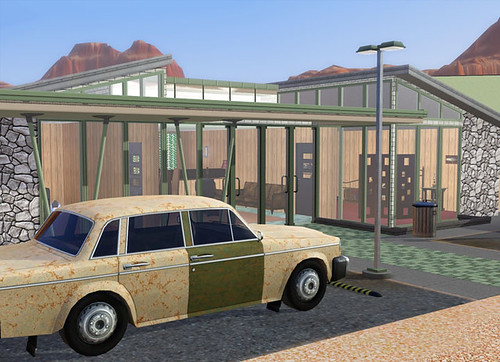 I love building modern and mid-century architecture in The Sims 3. The tools really lendthemselves to those architectural styles and enable me to build creativelywhile still appealing to a large number of Sims players. The desert oasis ofLucky Palms was my opportunity to do just that! For Lucky Palms, we created afiction around a town that incorporated some older Spanish Colonial homes and aseries of developments from the mid-20th century, as well as some largecontemporary homes. It’s difficult forme to pick a favorite house in this world, as I feel I put a lot of effort intoevery one that I built. However, my favorite neighborhood is definitely the drylakebed section. I loved trying to create the illusion of a once moderately successfuland perhaps somewhat speculative town that had fallen on hard times, but wasstill full of character (and characters!). This neighborhood gave me the chanceto build houses out of what had once been a storefront, or a gas station, or ayacht club on the banks of a now dried-up lake. I hope that players will enjoytelling the story of the Sims that live in this neighborhood, whether itcontinues its decline or becomes rehabilitated. Living in this neighborhood gives you the chance to meet somefascinating and eccentric neighbors, like the aging showgirl who lives in theabandoned theater. The option to explore this neighborhood within Lucky Palms allowsyou much more freedom in how you play.

As difficult as it is for me to pick a favorite house, I dohave a few that I find particularly special However, I suspect they aren’t theones most people would think. Players tend to like the large, elegant homes,but those are seldom my favorites. I like the Hudson residence because I thinkit resembles an older home that has been modernized by hipsters who have morestyle than cash, which is exactly the case for the Hudsons. It is a fairly nicehouse with a pool and enough room to accommodate more people, should theychoose to add on to the family. Not surprisingly, when I play, my Sims areconstantly remodeling! Personally, Iwould choose to start out in the small, inexpensive hut near the military base. Although this lot is small, I would findit fun and challenging to improve upon. If I had to choose from among the nicerhouses, it would definitely be tough to turn down the King family’s house, as theyhave pretty much everything. Plus, the free form jungle pool looks like a tonof fun! 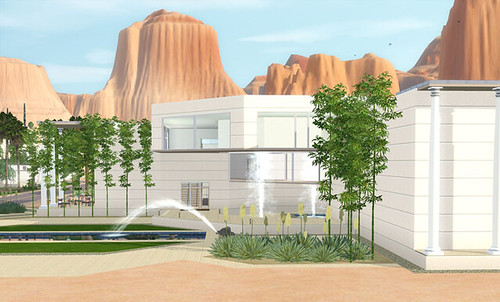 Currently, my favorite venue in Lucky Palms is the Sport FishingAquarium. This venue was added later than the others, after we realized that weneed a place for some saltwater fishing. I’m not sure how easy it is to fish atan aquarium in the real world, but your Sims can try it in Lucky Palms. Ienjoyed creating many of the other venues as well; the botanical garden was funand challenging to build, and I really like the state-of-the-art gym in LuckyPalms, where your Sims can relax in a new hot tub.

Alan Copeland is a designer for The Sims 3 who is responsible for manyof the fun gameplay objects featured in the Store, including the Triple RichesSlot Machine and the Hit ‘em Harder Blackjack Table found in The Lucky SimoleonCasino venue. He was also the designer for the Wishing Well, which is exclusiveto Lucky Palms. Alan, can you tell us a little bit about this mystical newobject?

The Sims has been one of my favoritegames for, like… forever. Long before I became a designer for The Sims, I was casting spells in Makin’Magic. I opened my first business in TheSims. Many of my college years were spent playing University. Ican remember playing a lot of video games, but nothing quite strikes the cordof nostalgia in the same way that TheSims does. So, you can imagine how exciting (and terrifying) it canbe when we decide to reimagine a classic object like the Wishing Well, as wedid for Lucky Palms!

I love Mrs. Crumblebottom as much as the next Simmer, but wedidn’t want to make a direct port of the Wishing Well from The Sims 2. We wanted this object to feel new, fresh and fun,in addition to having its own, unique sense of discovery. The trickypixies that live in the Well rarely answer a wish in a straightforward or predictableway, so watch out for all of the varied outcomes if your self-serving Simdecides to use the Wishing Well and take the fast track to Wealth or Power.

Aswe designed this object, we thought about the kinds of wishes that appeal toour players. Many Sims wish for love, so we took the opportunity to design forthis wish in a dramatic new way. We thought about the classic story ofkissing a frog and it turning into Prince (or Princess) Charming, a story that lendsitself to many fun and humorous potential outcomes in The Sims. Perhaps your Sim has the “Commitment Issues” or “Loner”trait but wants to have a child. Wishing for a bundle joy is a wonderfulnew way to grow your household (and it gets even more exciting if youhave The Sims 3 Pets!). Need a little pick-me-up? The pixies arealmost always willing to share some Happiness with your Sim. We reallytried to have a little something for every Sim, including those evil Sims who attemptto steal coins from the Wishing Well.

Even after your Sim has done all of its wishing, there’s morefun to be had. Have you ever fished from an enchanted, pixie-infested wellbefore? You’ll be amazed at some of the things you might be able to catch,regardless of your fishing skill level. The Wishing Well is one of my favoriteobjects that I’ve designed for The Sims 3and I hope that it turns out to be all that you could have ever wishedfor!