If patterns from former generations are to be held up as a template, then the Sims 3 is reaching its twilight years, with the Autumn release of what could well be its penultimate expansion pack – Sims 3: Supernatural.  With a few, arguably, weak expansions bloating out the third generation’s roster, the series needs a shake up to perk up the naysayers and what better way to do it than with those tried and tested fan favourites: magic and the supernatural.  Of course, one could argue that we’ve been down this road already, with vampires appearing early on in Late Night, and a number of magical items for sale on the Sims Store, albeit at exorbitant prices, but with Supernatural, The Sims Studio have upped the ante in many surprising ways, which could well see this expansion become the favourite of its generation.  GamingLives grabbed a moment of time from the busy Sims 3 Supernatural Studio Team to find out more, ahead of the September release. 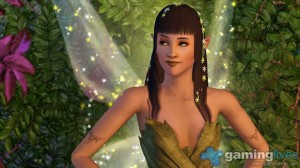 Sims 3: Supernatural allows the players to immerse themselves in all things weird and fantastical with the ability to create and live as a number of supernatural beings, from werewolves and witches, to vampires and fairies.  While we have already had a taste (sorry) of vampires from Late Night, and of werewolves in Sims 2, now, for the first time, players can directly create these creatures, or ‘supernaturals’ as the team refer to them, from scratch in the Create-A-Sim tool.  Rather than having to get bitten by a sinister dog or schmooze a vampire and ask them to turn you, you can build your own from the ground up, no mess, no fuss.  Want a Grotbags-style witch (Google her, younger generation, for this was the entertainment we ‘olds’ had as kids) with bright green hair and black lippy?  You can have her.  Or you can go down the sexier route and have a quartet of Craft-style witches, with a Fairuza Balk lookalike smouldering your screen into meltdown.