I attended a Preview Event for this Expansion pack at EA’s UK Supernatural Tour stop-off in Glasgow. I had the opportunity to play the game for two hours… which was not nearly enough! The game just seemed to throw so much at you at once I could have taken it in any direction and played any particular type of supernatural.

I decided after much deliberation to have a look at the family names and descriptions for the residents of Moonlight falls, which is the brand new world included in this EP. 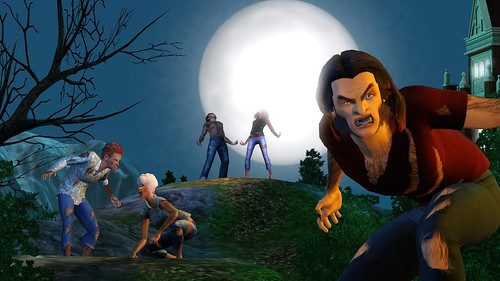 Families are based heavily on popular culture, Twilight, Charmed, Bewitched, Being Human, and funnily enough the family with the fortune teller contained Ghosts from the Goth Manor tombstones of the original game. The two Warring families are the Wolffs and the Van Goulds. I played around with the Crumplebottom sisters who are clearly based on Charmed.