SimGuruAlan shares some more info on the weather stone! Remember, you must own Seasons and Supernatural for this item to be available in game.


For the first time ever we have created an object that ties two expansion packs together! Players who have The Sims 3 Supernatural and The Sims 3 Season installed will get a mystical Weather Stone that allows werewolves, fairies, vampires and witches to summon their own mystical weather.

The Weather Stone will appear in new and saved games and will rise up from beneath the ground on a community lot in any of The Sims 3 worlds, expect for the vacation cities from The Sims 3 World Adventure. You can easily find the Weather Stone in your world by searching for the Map Tag in Map View.

The Weather Stone can only be activated by one of the four different supernatural characters that appear in The Sims 3 Supernatural. Each one will summon their own unique weather effects which will have a variety of differing outcomes ranging from special benefits to complete and utter chaos. These effects vary based on the supernatural character that activates it. Without further delay here they are!


Vampires
Vampires will be able to summon a cold Eclipsing Fog that puts other Sims under their spell. Sims who are generally unwilling to be turned, or used as a snack, can’t help but fall under the effects of the Eclipsing Fog and allow vampires to turn or drink them.


Fairies
Fairies are more adept with nature and have their own ability to summon a Reviving Sprinkle. The Reviving Sprinkle turns rain into flowers. Plants will be magically watered and fertilized, killing off weeds and making them disappear. The fairy magic doesn’t end there! At the end of a Reviving Sprinkle, a beautiful rainbow will appear across the sky.


Werewolves
The ferociousness of werewolves allows them to summon their own mystical powers through the Weather Stone. The Hunter’s Storm snows down collectibles onto the ground and increases their chances of finding rare items.


Witches
Witches will be able to call forth a Bewitching Rain that showers the world with green precipitation. This will make all Sims start to act a bit crazy. Sims who are under the rain will get a boost to their mood and have an uncontrollable urge to dance. Talk about an easy way to get everyone to participate in a rain dance! 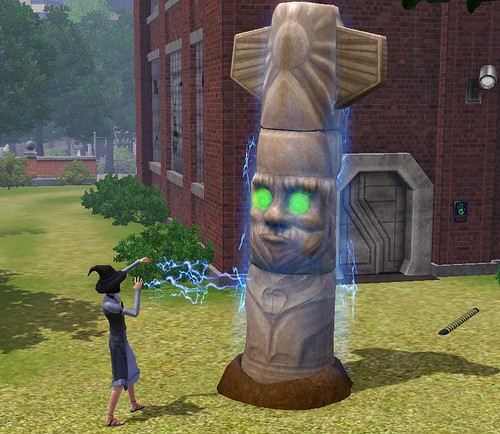