Winter is the season that really gets the most new in this game. When deciduous trees have lost their leaves, Spökeridags has been celebrated and the days become shorter, Sims one morning to wake up to a thin blanket of snow has settled on the world. The snow collected actually gradually on the ground, unlike previous games.Children will eagerly running to the window and admire the white landscape, later dressed dunrocken and go out and play in the snow. 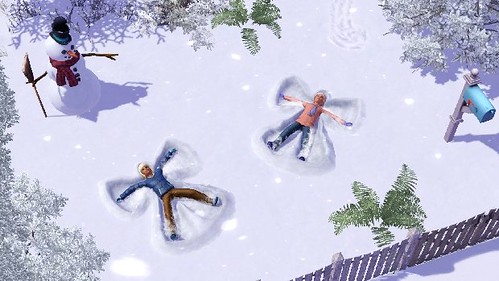 The snow accumulating on the ground, on rooftops, on the subject given out on the streets. The trees do not collect snow, because that would mean a substantial reduction in performance. Cars can not drive into the ditch because of slip, since this would require a lot of wasted work by the developers. It formed frost on the windows.