Due to the fact that University isn’t even released yet, means we won’t be hearing too much about Island Paradise. In the meantime, SimGuruGraham has shared bits of info on the June expansion, so I have compiled all the tweets for your convenience!

Click here for the first photos and info on Island Paradise

♦ Island Paradise will be the 10th full expansion pack for The Sims 3.

♦ Boats. B/B Houseboats. Resorts. SCUBADIVING. Can you believe it?

♦ Absolutely. The houseboats are fully buildable like your home; they just also motor around on the water!

♦ Will kids/babies be allowed to live on house boats as well? They sure can. Just think of them as a mobile version of your current Sim’s home 🙂 Can’t go into the nitty gritty beyond that; but I’ll talk all about them when we start divulging more!

♦ I can’t give away much info on houseboats yet; we’re designing them to allow a lot of freedom though

♦ Houseboats are too big to be contained within a single blueprint, but the plan is to make some available in the residential lot bin.

♦ I mean you can’t fit the entirety of a houseboat into a single blueprint. The houseboats themselves will be fully customizable like a normal Sim home.

♦ It’s a house on a boat. Don’t overthink it

♦ Will we be able to make a remake of Titanic with our boats ? Not sure the Titanic would fit in a 64 x 64 lot.

♦ Was able to build a houseboat for the first time in today’s build – exciting times!

♦ Just had a newspaper get delivered to my houseboat for the first time… totally wasn’t expecting it, my jaw dropped

♦ Just had my houseboat successfully dock for the first time! It’s incredible how much the game has progressed over the last week.

♦ Island Paradise is still in development and nothing is finished. It’s always exciting when you fire up the morning build and have new things happen. While houseboats will be treated like houses, having something like the newspaper get dropped off out at sea doesn’t just “work” without a lot of programmer love 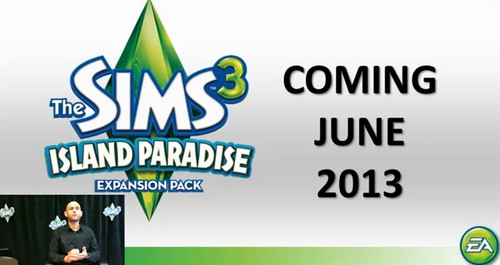