IGN has released an exclusive first look at Island Paradise which includes a new screenshot and info bits! They have also confirmed that as of right now, the release date is June 25th, 2013.

The towns and places you can take your Sims are large, but the idea with Island Paradise is to open up the world even more. Instead of building a home and living in one place, this expansion allows you to build boat houses that you can use to explore uncharted waters. It’s basically The Sims: Trust Fund-Baby Edition.

Even pizza comes to you via speedboats. It’s still a ways off from its June 25release, so EA is keeping most of the Island Paradise details hush hush. Still, EA did inform us that on top of exploring you’ll also be able to create resorts, working to get them a coveted five-star rating. The expansion will also have other new features, including the ability to go snorkeling, fish off your house boat, discover buried treasure, scuba dive and swim wherever you drop anchor. 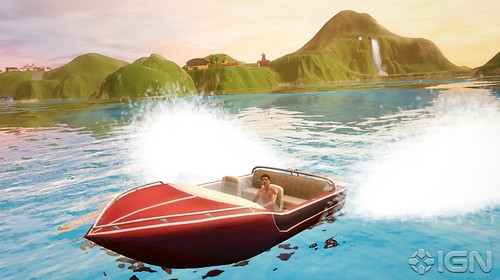