Your new town for The Sims 3: Island Paradise is Isla Paradiso. It’s actually a town that covers several different tiny islands, most of which are not connected by bridges. This means your Sims will take boat taxis or their own boats to island hop.  I love this new town.  I’ts very large, at least as big as Dragon Valley, with a lot of landscaping. 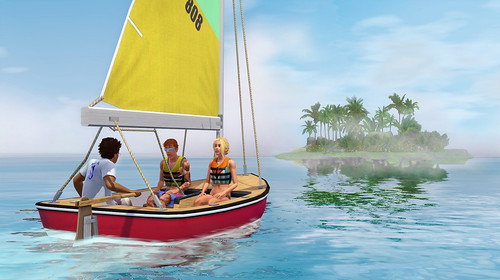 If you’ve ever been to Hawaii, I really think that’s what these islands were based on. The terrain simply isn’t even on an island and they’ve done a perfect job copying this. Of course, that means that you aren’t going to be able to build houses as easily as you used to, but they have also added stilted foundations to help you deal with this bumpy terrain and to make it possible to build your house directly on the water.