We are delighted to welcome Minraed from The Sims International Film Festival as our blogger today. We could give a long winded introduction, but let’s just hand it over to Minraed to dive in to all things Machinima. 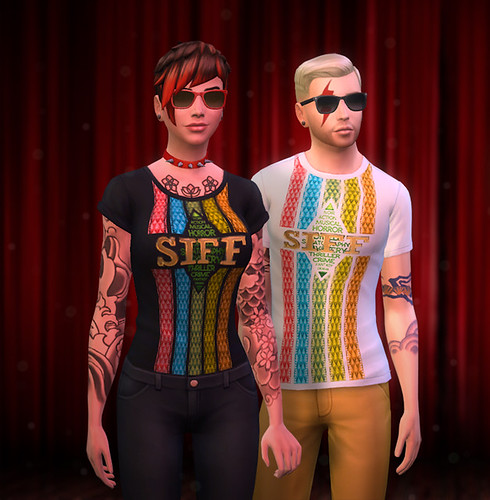 Machinima, for those who don’t already know, is the making of films or videos from game footage. Though the number of machinima makers in the Sims community, compared to say builders, may seem relatively small, it is a growing group with a mighty talent. The Sims is a natural tool for machinima making with a focus on realism that can be manipulated in countless ways to achieve a nearly endless array of genres.

SIFF, or Sims International Film Festival, was created to celebrate this talent and this wonderful tool that we have in our Sims games. SIFF started back in the first year of The Sims 3 era, and recently celebrated its 10th season – Fall 2014. We run the festival twice each year with films premiering in March and September of each year so our Spring season is just beginning.

Our philosophy is one of support, inspiration, and learning. We do not screen machinima for a certain level of skill; we accept ALL machinima making skill levels. There is a general category and one for what we call Masters of Machinima, so that real newbies don’t have to fear “competing” against some of these very experienced movie makers. The thing is though, that SIFF isn’t meant to be a competition to be won, rather more so it is meant to be a showcase of talent and creativity. We all know that Simmers are a highly creative sort, and we wanted to nurture this aspect as being more important than winning. However, we do still have a voting component in the form of viewer’s choice polls for a variety of categories, and some special merit and recognition awards that are voted on by staff and guest judges so that there is always something to strive for.

SIFF is open to all Sims machinima makers, that means The Sims 2, The Sims 3 and as of this season, The Sims 4. We were so excited to be able to showcase some of the first The Sims 4 machinima in our 10th season special, and in this season we expect to see a huge new wave of new machinima style coming our way with the addition of The Sims 4.

We invite creators of music videos, short and feature-length films, series, MEPs (multi-editor projects), and advertisements or public service announcements. Our goal is to showcase the talent of Sims machinima makers from around the world, so you can always be sure to find a wide variety styles and genres on the playbill each season. The more submissions we have, the more viewers we draw, and the more viewers we draw means more views for the machinima makers.

If you think that SIFF is something you would like to participate in then visit our website and start exploring the SIFF section on our menu bar. There you will find the rules booklet as well as past SIFF stuff to get a feel for what we have been up to. Each season starts with a poster challenge, usually about 2 months before the films premiere, so watch for the new seasons to start getting underway in early July for the Fall (September) season, and January for the Spring (March) season. The basic principle of SIFF is that your machinima must be new, never seen before the premiere date. We use the promotional time to build excitement through film posters, trailers, and the SIFF Buzz tabloid.

At Simatography we strive to act as mentors, teachers, and encouraging supporters, so if you drop by our site now you will find many tips and tools to help you get started on your way to making great machinima. We hope to see you sometime, and if you are already making machinima, we hope that you will consider joining us for a future season of SIFF.

Thanks to Minraed for telling us about The Sims International Film Festival. Watch out next week for a guest blog on some film making techniques in The Sims.