Last week we looked in on a baker opening up her own retail business in The Sims 4 Get to Work. This week, we’re following a young alien couple hiding in plain sight, about to embark on a magical journey.

It was love at first sight for Kristen Dyson and Spencer Jackson. They met outside the new bakery in town and moved in together after a brief courtship. How great it was to be young and in love! The first night in their new home was one of celebratory WooHoo, but they couldn’t stay uptoo late. They’d recently started new careers – Kristen was a Scientist, and Spencer was a Detective – and they had to be up bright and early for the day ahead. And to think, no one they worked with knew that they were aliens, living in disguise as regular Sims!

A few days later, Kristen felt something odd. She’d started the day in a good mood, but only halfway into her work at the Future Sim Labs she was really tired. She knew she wasn’t sick. This felt… different. Could this be what she thought it was? After work, she told Spencer the good news: she was pregnant! He had a surprise for her as well: so was he! 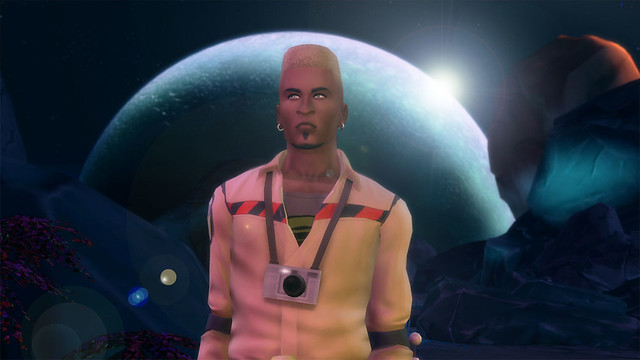 A few days later they both had visible belly bumps. A loving couple, pregnant with each other’s alien babies – how joyous. Now they were able to share every uncomfortable, waddling step of this miracle together.

Before they got too big, they wanted to travel back to their home world to share the big news with some of their own kind. Lucky for them, Kristen had just recently brought home an Electroflux Wormhole Generator from work, so it wasn’t difficult for the duo to travel light-years away to visit the planet Sixam. Once they passed through the portal they were able to freely drop their Sim disguises to hang out with their alien buddies. Their friends on Sixam were overjoyed with the news, and looked forward to having more aliens they could discuss those weird human foods with.

A few days later, Kristen and Spencer started getting so big they looked like they could pop at any moment. What would they do if they both went into labor at the same time?

When the big day finally came, it was Kristen who went into labor first! Luckily, a new hospital had just opened up in their town, so they rushed Kristen to the emergency room to let the professionals (with their high tech robot machines) deal with it. Once they were there, Spencer realized that their alien origin was safe – the doctor, too, was an alien in disguise. They knew they were in good hands. 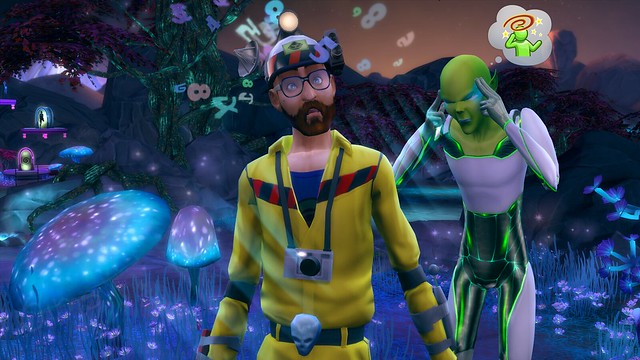 Everything went perfect for mom and Myra, the couple’s new baby girl. They went straight home to start cooing and cuddling, but just as they got settled, it was Spencer’s turn! Luckily, Spencer had been planning for a home birth, so he was ready to take care of business himself. What he wasn’t planning for, though, was twins. Two beautiful, perfect, green, alien children: Kaloy and Sodi.

Once the three children were asleep, Kristen and Spencer went right to bed. They’d had quite the busy day! And now that their household more than doubled in size, they’ll surely have plenty more ahead of them…

This March 31, your Sims will rule the workplace in The Sims 4 Get to Work Expansion Pack. You will control your Sims’ every action as they tackle three active careers, whether it’s saving lives as a daring doctor, solving crimes as a fearless detective, or creating inventions as a mad scientist. You will also be able to put your Sims’ entrepreneurial ambitions to the test as you create and customize unique retail businesses. Plus, there are new venues, more skills to learn, and the chance to befriend some aliens!