The Sims 4 Get To Work: Behind The Scenes of "Still Life" | SimsVIP

With the upcoming release of The Sims 4’s first expansion, Get To Work, EA and The Sims Studio have shared multiple promotional trailers that highlight some of different features of the game. One of the trailers released thus far is the “Still Life” Retail Trailer which has definitely captured the hearts of players worldwide. 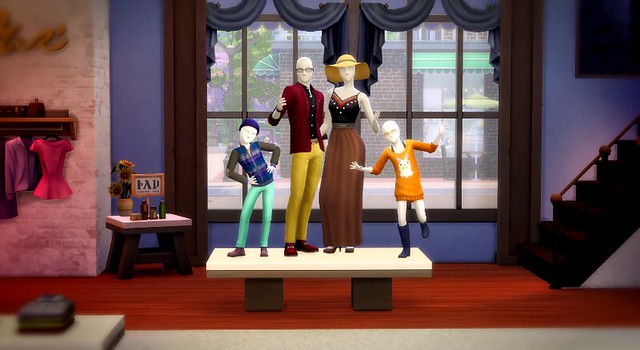 The story of two life-less mannequins singing in a clothing store is heartwarming as it is, but the music and lyrics that accompanies the singing manniquins is what has made the trailer an attention grabber. Below is the original Still Life audio track provided exclusively to SimsVIP by Electronic Arts and The Sims Studio.

Beautiful song isn’t it? Ever wonder how a trailer like this comes to life? Todd Stallkamp, the Creative Director of Plumbob Pictures, shares the story of how his shower tunes turned this idea into a heart-warming trailer.

Whenever I see a mannequins, I hear them sing.

“Still Life” really began with a panicked 3:00AM email to a colleague – wherein I tried to get the project killed. We’d been spinning our wheels trying to find a playful concept around our new Retail Systems, deadlines were looming, and I had nothing. Inspiration struck in the morning. Thank you inspiration. And I began singing – not a lie – in the shower. I had the first few lines in my head by the time I got in to the studio.

Mannequins not having mouths solved our lip-synch problem…. But how do we bring these two star-crossed lovers together? They can’t walk! That led to the “Duh, go into build mode (A hand came down from heaven)!” moment. I love me a song about game mechanics. The rest of the lyrics came together fast – and we brought in one of our favorite “The Sims 4” songwriters & composers, Raney Shockne. He and I spent a few days singing at one another over the phone. People stared. But the talent that Raney is – he had nailed it. “Still Life” found its music.

While Raney hunted for singers, we began building our “sets” and capturing footage. Stylistically, we wanted all the shots to be rather flat with parallel lines of actions (lots of Sims crossing from one edge frame to another). We were hoping for the trailer to feel like something you might see on a stage.

Aesthetically, we restricted our palette to really make our mannequin’s clothing pop. They are stark little creatures. We gave one a hat and one a pair glasses to give them a bit of character. With the ability to change their poses, I think they really came to life.

In just over a week, the song came together, the visuals came together, and we polished it up by adding light graphics (that heart burst) and sound design (you’ll hear some ambient noise in the beginning and end). I think we ended up with something special.