We’ve spent the last few weeks talking about the new careers in The Sims 4 Get to Work, listing all of the fun ways your Sim can save lives as a Doctor, protect and serve as a Detective, and run a retail store. And this week, we’re want to chat about some of the cool things you can do as a Scientist!

Want to know how to turn your Sim into a cackling mad Scientist (or brilliant inventor)? Here are some theories we’ve been working on that your Sim should totally try. 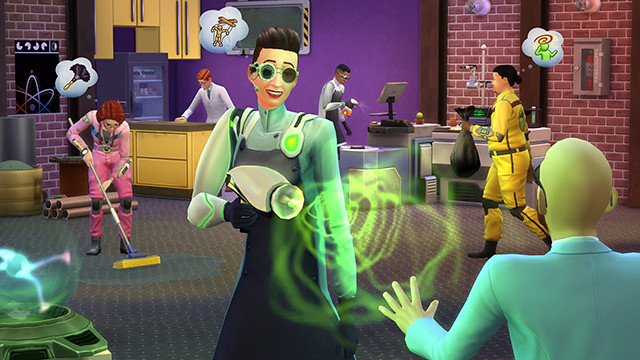 Clone your friends. We’ve all been there. Your Sim calls up their best friends to hang out, but they’re all too busy with “work” or “school”. It’s a drag. Luckily, science has a solution. If your Sim is a Scientist, they can just make some copies of their best buds. Hopefully they turn out… normal? It’d be a shame if they were… evil? MUWHAHAHA!

Create a Serum to change your Sim’s moods. Your Sim isn’t just tinkering with robotics as they progress through the Scientist career. There are also a number of serums they can create, which manipulate their moods and emotions. What’s that old saying again? One serum makes your Sim happier, and one serum makes your Sim mad? There’s even a serum that can turn your Sim into a ghost, but don’t worry, the change is temporary. If it wasn’t, well, then the serum would pretty much just be a poison.

Order a co-worker to clean for you. Scientifically inclined Sims can invent all sorts of goodies, but the most versatile tool at their disposal might be the SimRay. Just point it at the nearest Sim and you can make them do all sorts of things, from swapping into their nightwear to sleeping on the floor. The SimRay can even make them clean up after your Sim. Play your cards (or, rather, science) right, and your Sim will never have to take out the trash again.

Make crazy money transforming objects with the SimRay. The SimRay’s usefulness doesn’t end at being a portable mind control beam – your Sim can also use it to get rich quick. One of the first upgrades available for the mechanical marvel allows your Sim to turn an item into another random item. Use it on cheap objects and they might turn into things that can be sold for a major profit.

Visit Sixam, the alien home world. Say “Electroflux Wormhole Generator.” Say it. Say it out loud. Sounds super cool, doesn’t it? And it’s even cooler than it sounds – you can use this awesome invention to send your Sim to the planet Sixam, which is filled with interesting aliens to befriend. It also has all new alien flora, so don’t forget to bring some samples back.

Make friends with the Invention Constructor. Your Sims are going to spend a lot of time in the Science Lab while working their way through the Scientist career. That said, they’re not going to get lonely in the lab – besides the other Scientists that work there to talk with/use the SimRay on, your Sim will be able to befriend the robotic Invention Constructor. We know what you’re thinking: isn’t befriending AI dangerous or amoral? We… don’t actually have an answer to that question. Maybe?