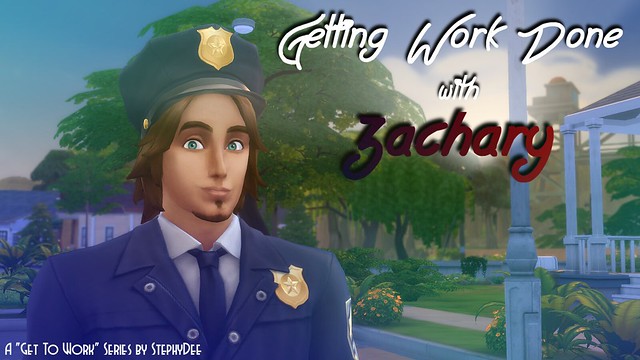 Detective work, solving crimes, taking mugshots! You name it, Zachary here is gonna do it! Welcome everyone to the Detective chapters of my “Get To Work” series, where we follow our main character through the hardships and rewards that come with the Detective career. Is Zachary going to thrive in the world of criminals and potential ‘big’ cases? Will he break under pressure and succumb to the stress of interrogating a suspect? Will he chase down ‘perps’ and ‘lowlifes’ with exceptional speed, all whilst keeping his stylish long hair in tip top form? Only one way to find out, isn’t there? Let’s put Zachary to the challenge!

If you’re just joining the series, feel free to check out the first set of ventures with the “Get To Work” expansion, where we follow Lexi Greystone as she attempts to run her own bakery! We’ve got: Part 1 , Part 2 , and Part 3 right here for easy access! If you’re already up to speed on the series, then 10 points to you! Let’s have some fun with Zachary Elmont, shall we?


As with all jobs in “The Sims 4”, it all begins with a simple mouse click (or phone dial if you will). With a simple interaction such as “Find A Job”, our dear Zachary is about to embark on the career that will change his life forever. He’s semi-destined for it, with him originally being a Secret Agent and all (which you didn’t hear from me, by the way. Keep that on the DL, m’kay? Good!). Now, Zachary has always been the athletic type, so he’s constantly fighting the urge to do push ups or working out on the treadmill. Why not get a head start on his career by sending him to the gym for a few hours? I mean, it’s not like he’s dreading the thought of going there. I can practically hear him giggle with happiness every time I choose the interaction on the map. 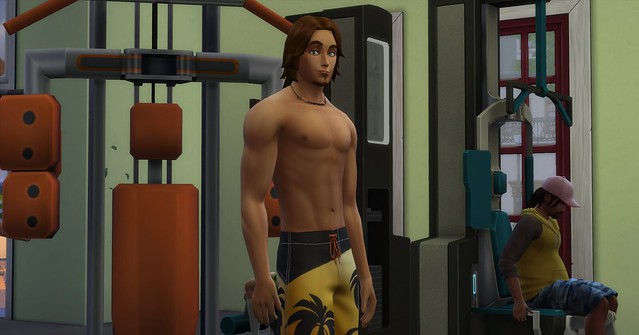 There! Now he’s a bit more fit and raring to go…at least as raring to go as a few measly hours at the local gym can make you. He’ll be sure to visit more as he progresses in the field, I’m certain of it. We can’t have Zachary here huffing and puffing as he chases down criminals and perps, now can we?

Afterwards I send him home, seeing the day starting to fade and the nighttime rolling on in. He arrives at his “Home-Under-The-Bakery”, where we followed his fiancée Lexi during her adventures (did I mention she and Zach are engaged nowadays? Yay them!). There are a few people on the lot, perhaps stragglers from her bakery, I assume, and suddenly Zachary becomes Tense. I get confused, since he isn’t a Loner by any means, so I check and see what’s causing it. 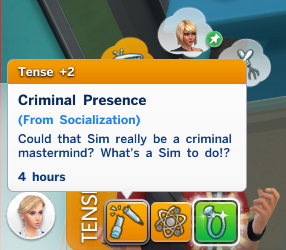 Uh……good work, Zach? You haven’t even had your first day of work, and already you’re spotting criminals and having the urge to take them down. You all can call this moment a coincidence. I say it’s fate. With that moment over, I take care of a couple of Zachary’s needs and send him to bed. He needs to be up bright and early for his first day of work, so no late night TV for him!


Right at the crack of dawn, the man is awake. Taking a shower and grabbing a bite to eat, he’s now as ready as he’ll ever be for his first day. I get the prompt asking whether I want to follow Zachary to work or stay on the lot. Considering that this whole set of the series is dedicated to the Detective career, I think I’m gonna follow him. Besides, I don’t want to risk running into Marilyn Copeland again on the home lot. For all we know, she’ll come waltzing up with a hybrid of her Hot Dog attire and her Clown outfit. Clowndog Copeland. No thank you. 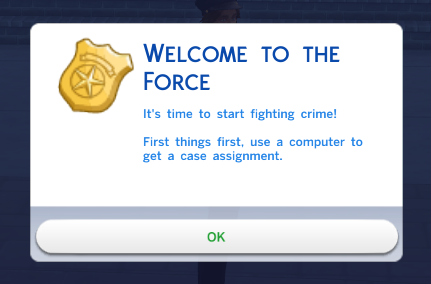 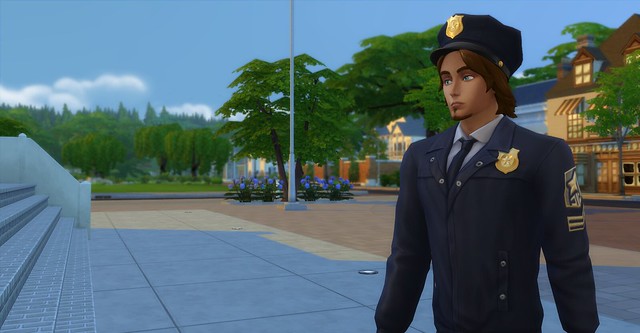 Alright! We’ve made it! We’re here! As soon as we arrive at the station, we get our welcome message, telling us to have Zach get a case assignment on the computer. Welp, let’s not waste any time! Zachary enters the station, and as I look around, I see all the computers are being used by other officers. To be on the safe side, I kick an entry level officer off of his computer and have Zachary take his instead. I didn’t want to push our luck by forcing the higher-ups off their computers. Zachary probably wouldn’t be able to even get his first case before being tossed out the door if he did that. 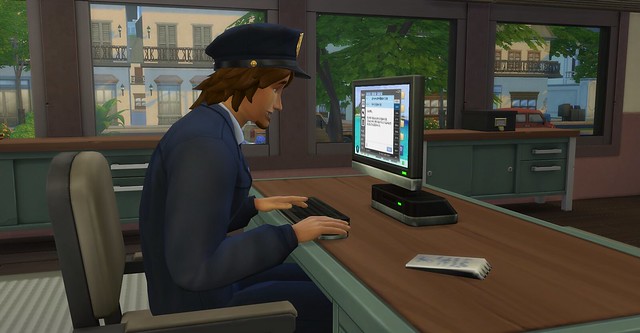 Zachary gets right to work, searching the computer for his very first assignment. Soon after, a prompt pops up telling me that Zach will have to assist a veteran Detective around until he knows the ropes around here, which only makes sense. I mean imagining Zachary flailing around with no clue what to do would be entertaining to say the least, but very little crime solving would be done. No matter, for we get sent to the Crime Map in order to choose the location of the crime scene, and by extension, we also get sent straight to the crime scene to do some digging on just what precisely went wrong there. 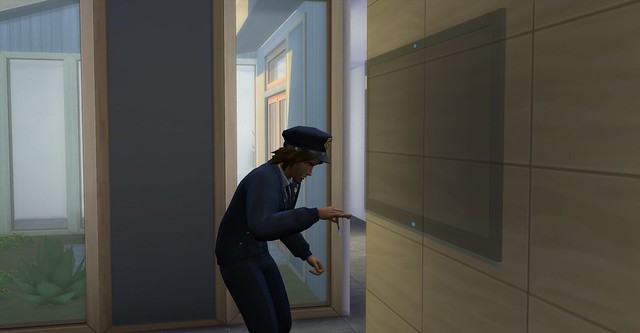 Looks as though we have a thief loose in the town! When Zach arrives at the house, we quickly see what the issue is. There are a couple more officers there already, all doing their part in the investigation. The prompt pops up for Zach to start working, doing various things like investigating evidence, taking fingerprints, etc. First thing I do is have him investigate the stolen items, which happen to be a flat screen TV, a stereo and a computer. 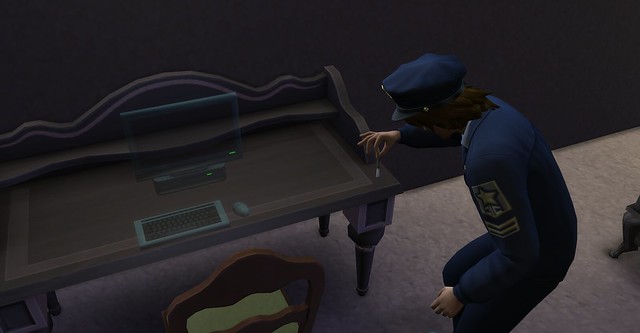 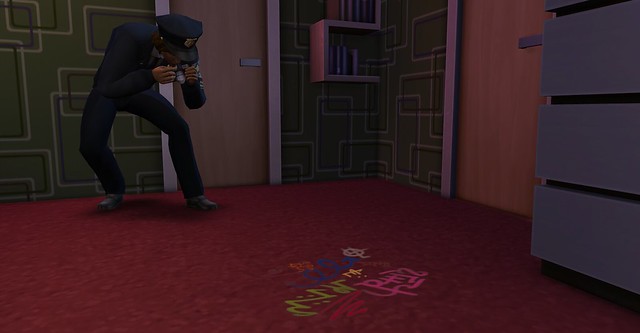 In a completely random room in the house, I find *GASP* SCRIBBLE GRAFFITI! Oh, the horror of it all! Don’t they know that stuff never washes out! If you ask me, THAT is the true crime in this whole situation. Actually, it turns out this is evidence left behind by the criminal. As such, Zach gets right to work on taking its picture, and with a simple ‘click’, the evidence is recorded forever.

Right after that, I decide to ‘Search for Clues”, just to be sure I haven’t missed anything. Zachary then uses what I assume to be his Magic Police Powers and scans the room for anything he missed. Seriously though, can we find a way to get this power in real life? I would be first in line for something like that, I tell you that much. I’d never lose anything again! 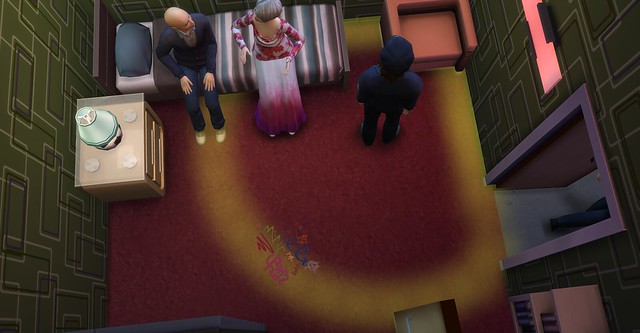 With that, the last thing he needs to do is interview at least one of the witnesses. Since one’s already talking to another officer, I have Zachary pull the other off to the side and ask a few questions pertaining to the case……at least I hope that’s how the conversation’s going. 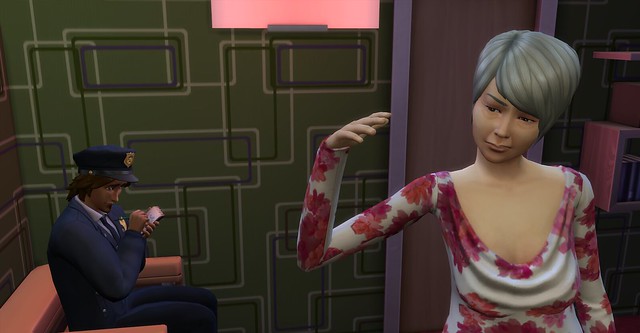 Witness: Look at this mess! You guys better clean this filth up immediately! I just can’t stand it!
Zachary: Ma’am, you said you saw the suspect jumping out of your window. Can you describe what he looked li-
Witness: How can I even focus when my carpet is ruined?! I paid top dollar for this carpet from Monte Vista Flooring! I’m hosting my party at 6pm and it needs to be perfect!
Zachary: Ma’am……you currently have no TV, computer OR stereo. I seriously doubt this party is happening…


After interviewing the witness, Zach’s job here is done. All the prompts and tips say we’ve done all we can here, so it’s time to head back to the station and go over the evidence. As we leave, a prompt reminds me that leaving the crime scene will wipe the area clean, so if I need to go back……well, I can’t. Looks like it’s no mistakes here, guys. You only get one shot at the crime scene, so if you want to do a stellar job, then don’t miss anything!

When Zach returns to the station, the next prompt says the evidence needs to be analyzed, so I send him to the Chemical Analyzer in the hopes of uncovering something about our ‘perp’. Let’s see how he fares… 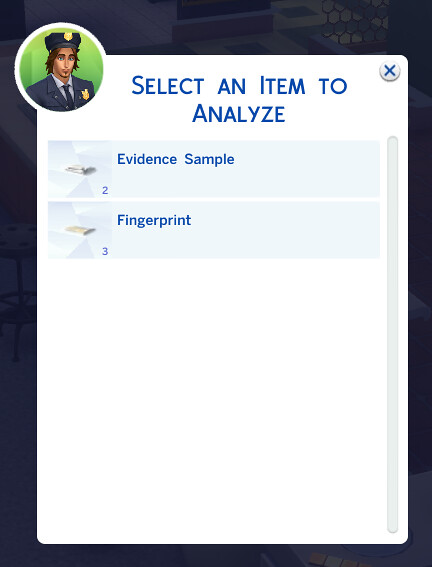 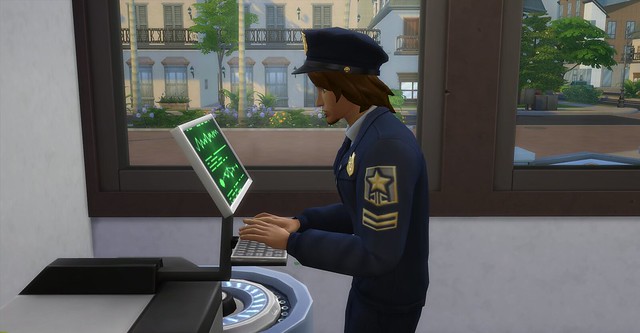 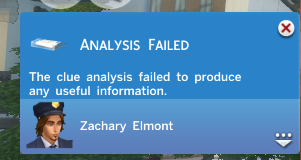 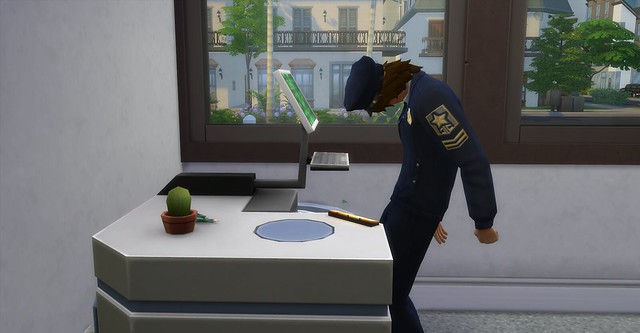 Actually, it takes three times before Zachary gets a positive result, and after a short session on the computer to file the evidence, his part in his first case is finished. WOO! Go Zach! 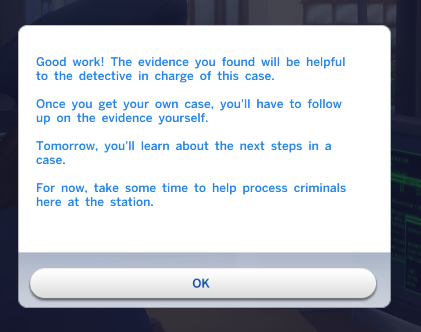 Process criminals? Don’t mind if I do! Heehee! It’s always neat to see those that ‘almost’ got away with whatever they did, how the regret fills their expressions, the sorrow of what their actions have caused, th- 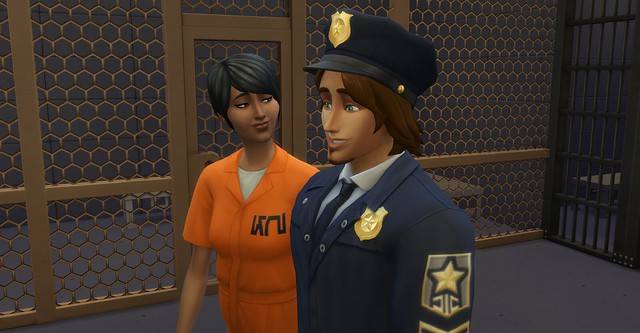 …the flirtatious way this female prisoner is gazing upon our dear Zachary here? Oh, nice try girl, but he’s already taken. Besides, he’s not into hardened criminals like yourself, and he’s not stupid. (I suddenly have the urge to see this prisoner and Lexi go at it in a brawl of sorts. Lexi would SLAY this woman, that’s for sure. I mean, you saw her fuming when it came to just her sweets, just imagine how livid she’d be if someone tried to mess with her fiancé?! I admittedly cringe at the thought.) 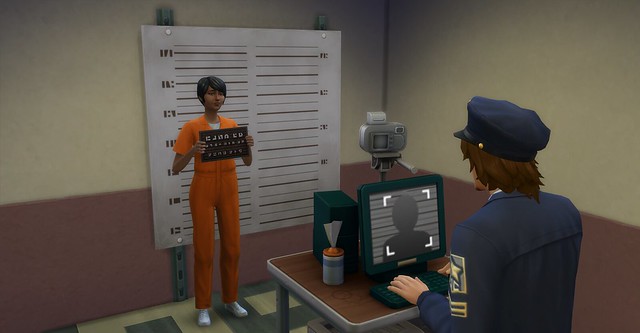 Ha! See, lady? He’s immune to your advances! That’s right, take that mugshot with your defeated smirk. Now your failure will live forever in photos. 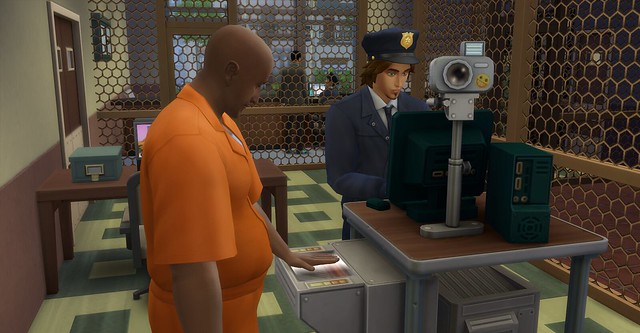 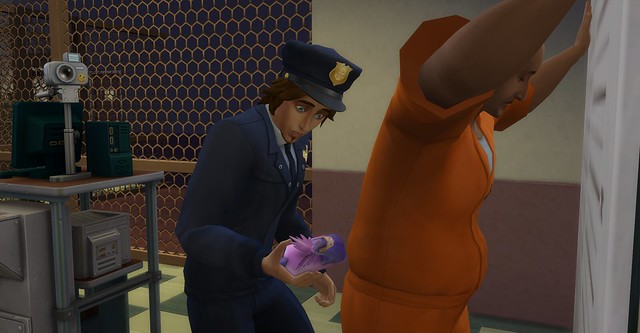 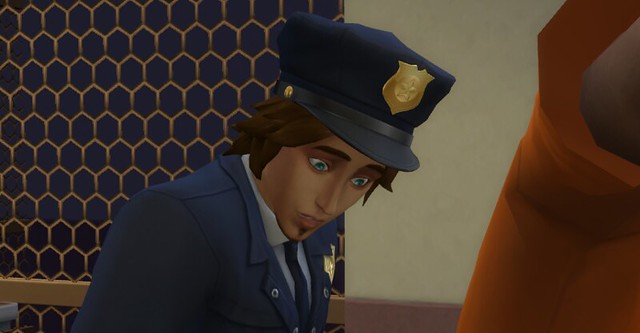 Zachary: You uh…you have a My Little Llama doll, sir?
Prisoner: I don’t need you judging me. That’s a collectible!

Some prisoners have hammers, tape measurers, dolls, things all of that nature. Those things get tossed aside like yesterday’s news, but dolls tend to get the most attention, ranging from My Little Llama style to Barbie inspired pieces. 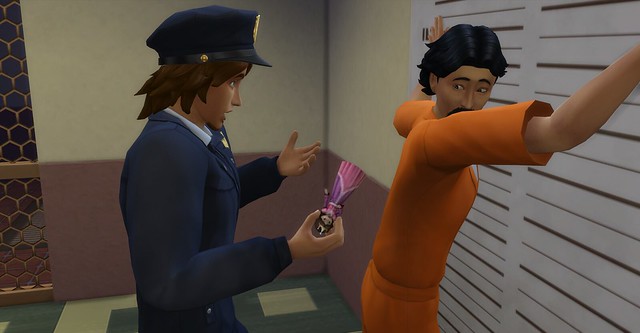 Soon enough, Zachary fills up his ‘goal’ meter, and he’s done for the day with a ‘fantastic’ rating.

For his first day, I say he’s done rather well. He’s quickly catching on the way things work with cases and the station, and I think in no time he’ll be a true pro. Well, in the meantime I think we’ll leave him for now. He’s had a big day, so he deserves some rest. Tomorrow he starts a new day, with the hope of a promotion! Stay tuned for the next part of “Getting Work Done With Sims“, and we’ll find out just how good Zachary is at being an aspiring detective!