Fans of The Sims 4 have been vocal about wanting more space to build their Sims’ homes on, so earlier this month, the team announced that it would be adding the world of Newcrest to The Sims 4 for free*. Learn more about the inspiration behind this new content with The Sims 4 Creative Director, Lyndsay Pearson.

Fans Wanted Space – Our team spends a lot of time reading feedback and comments on Twitter, Facebook, forums, and other social media sites. It was really clear that players were looking for more space for their Sims to inhabit. We also knew that as we continued to expand the gameplay possibilities, they would need more space.

Creating Newcrest – We set up a brainstorming session with our environment team about what we could do next. At the time we were working on The Sims 4 Get to Work, and we’d just released the Genealogy Update. It made sense that we would need to provide more space for folks to move their Sims into. So we came up with this idea to combine elements of Oasis Springs and Willow Creek to create this new space – Newcrest.

A Blank Slate – After confirming that the environment team was able to work on this content, the next thing we had to decide was what to fill it with. Or rather, what to not fill it with. The community’s overwhelming request for space to tell their stories made it clear – we should make it a blank canvas.

Since The Sims 4 Gallery allows players to quickly download interesting creations from other Simmers, it seemed like the perfect opportunity to let players turn this new space into whatever they wanted it to be! Now, we can’t wait to see what exciting creations our players will chose to build or drop into Newcrest. 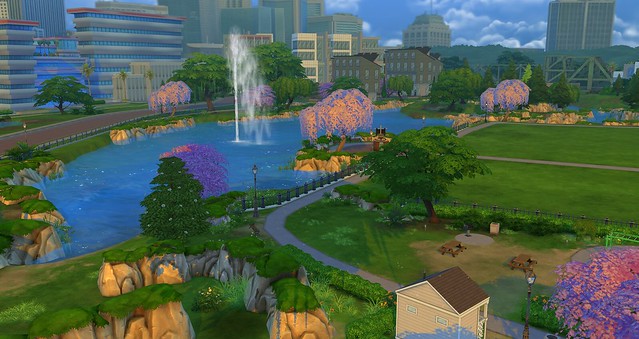