Editing Club Rule Interactions will show you how to remove and add interactions to club rules. Before you begin, please make sure that you’ve followed these tutorials:

Additionally, since we’re going to be opening multiple XMLs later in the tutorial, I suggest changing Notepad++ settings so that it automatically opens each XML in different windows:

Some club rules you may want to remove interactions from. For example, I don’t like other members of my garden clubs taking my harvests, so let’s remove the harvest interactions from the Tend Garden rule.

All of the club rules will already have the interactions needed. However, there may be an interaction that you feel is missing and would like to include it. Adding is a little more trickier than removing. Let’s add the Grab an Ice Cream Cone interaction to the Eat club rule.

Getting the Correct Values

Note – You can actually add anything for the Nvalue because any words inside <– –> are comments that aren’t read by the game. 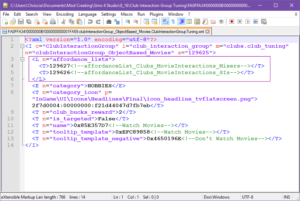 Each <T>..</T> code there include additional interactions. Let’s check out the ones for the Watch Movies club rule.

Repeat for any other <T>..</T> codes listed in the affordance_lists of your club rule XML if needed.