The Sims has released an announcement blog for The Sims 4 Vampires Game Pack.

Supernaturals have always been a great part of The Sims, adding even more unique storytelling opportunities along with darker, crazy fun. And that’s why we’re super excited to announce The Sims™ 4 Vampires* Game Pack, coming January 24th, 2017. 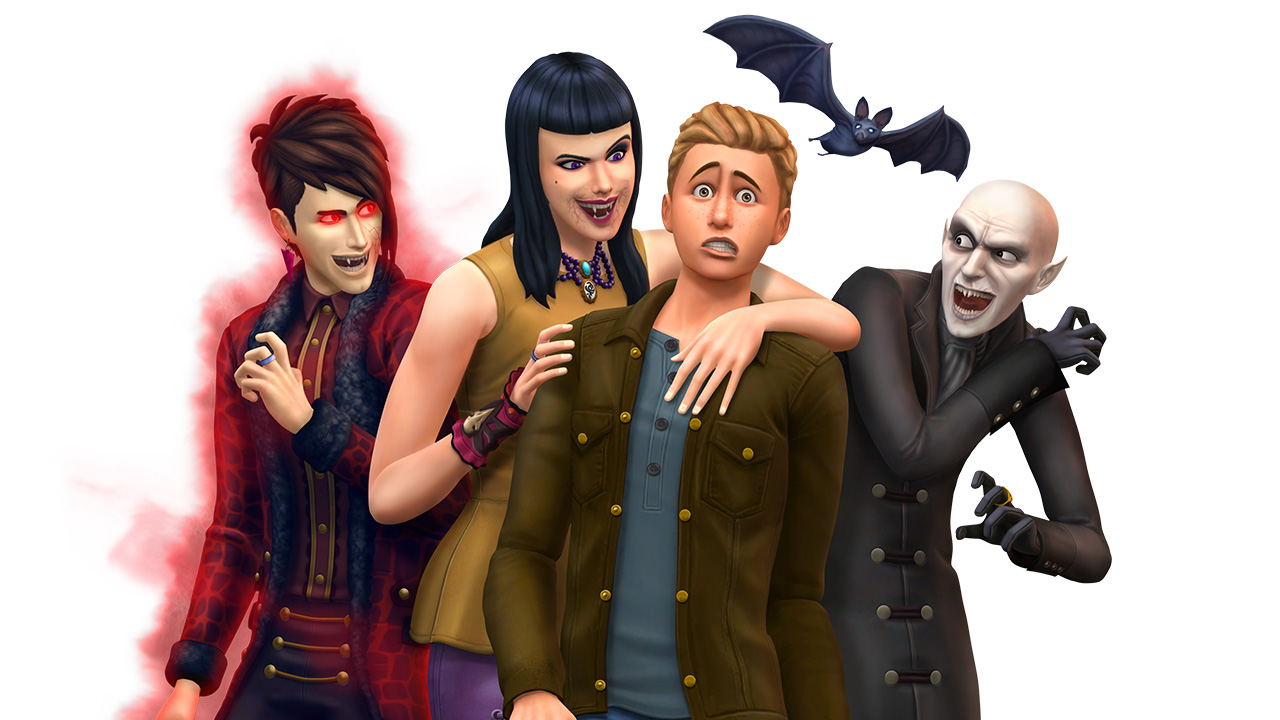 For The Sims 4, we really wanted to build out Vampires more than we’ve ever done before, and we think you’ll really enjoy them. They have their own special Vampire motives and needs, focused around gaining enough Plasma, Powers and sleep. Plasma is what Vampires drink, and it comes in a few different varieties. Your Sim can purchase Plasma Packs if they’re wanting a quick fix, or grow Plasma Fruit as a more long-term option. If you want to be a more traditional Vampire, you can also creep up on unsuspecting Sims while they sleep drain Plasma from them. Or just ask nicely, but where’s the fun in that?

Now, hold on, go back. Powers? Yup, Vampires have Powers! You’ll be able to use these to turn other Sims in to Vampires, and move around in different forms, and more. We’re going to talk about that in in the coming weeks, we promise. But for now we’ll just say that they add to your experience as a Vampire, gaining both powers and weaknesses which will affect your story and how you play your Vampire.

Vampires also can have two forms: regular and dark, and if you have both then your Sim will spin in to the Dark Form to perform Vampire actions. They’ve got their own creepy walk style too, that we think you’ll really love. Oh, and you probably shouldn’t leave them out in daylight either. After a little while they get a bit… flammable. 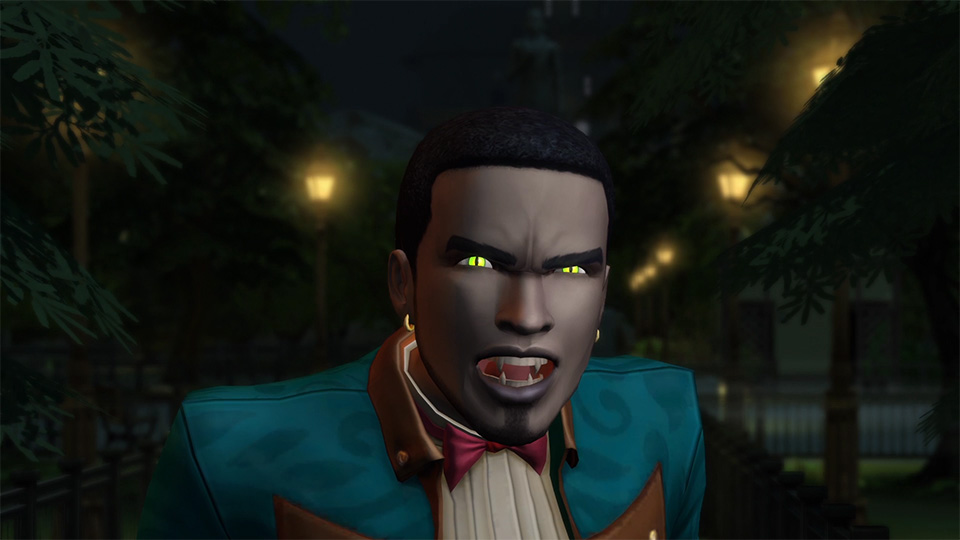 This Game Pack also adds a bunch of totally new Create a Sim options! We’ve got glowing eyes and creepy eye sockets, new washed out skin tones suitable for Sims that literally never see daylight, and some really dramatic brow options to give your Vampire that sinister-ancient-being look. There’s more, don’t worry, but we know how much you love finding fun new stuff. Oh, and about those two forms. You’ll be able to fully customize both options, but if you’ve perfected an outfit and want it for both forms, we’ve got you covered with a handy little button to copy between them!

Wanting a whole family of Vampires? Sims can be born as a Vampire, but their powers won’t start until they age up in to Teenagers. You also won’t know until then if they got the Vampire genetics or not, as the Plumbob style won’t change until then too. At that point, they’ll also stop naturally aging up. Don’t worry, you can get the trusty Birthday Cake out and age them up that way if you want to, or they can just live forever and continue their legacy in Forgotten Hollow.

Did we mention Forgotten Hollow yet? 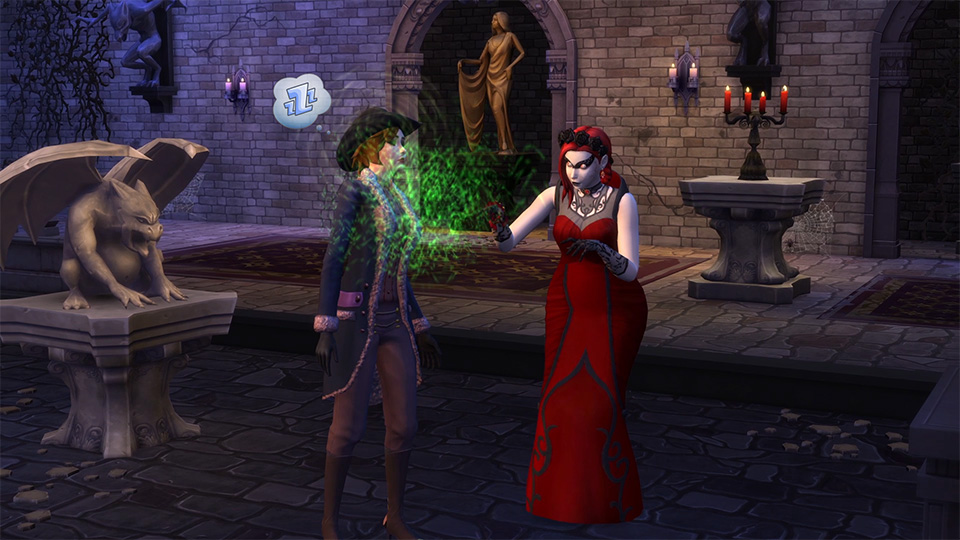 Forgotten Hollow is the new World coming in the The Sims 4 Vampires Game Pack. It’s completely different to previous The Sims 4 worlds, and makes a great place for a Vampire to live as night-time lasts long here. There’s one block, with five lots, all centered around a plaza area dedicated to Vlad, the founding Vampire of Forgotten Hollow. You’ll notice that this World looks and feels totally different to the others in The Sims 4, with creeping fog and a lot of withered, old foliage. We wanted this to feel like a centuries-old neighborhood with history and secrets, so there’s also some great Build & Buy Mode objects to help you create your perfect Vampire home. There’s also a lot trait that’ll encourage Vampires to stop by your Sim’s home more often. Don’t worry, Vampires aren’t unique to Forgotten Hollow and they will show up from time to time in other Worlds, just not as often. 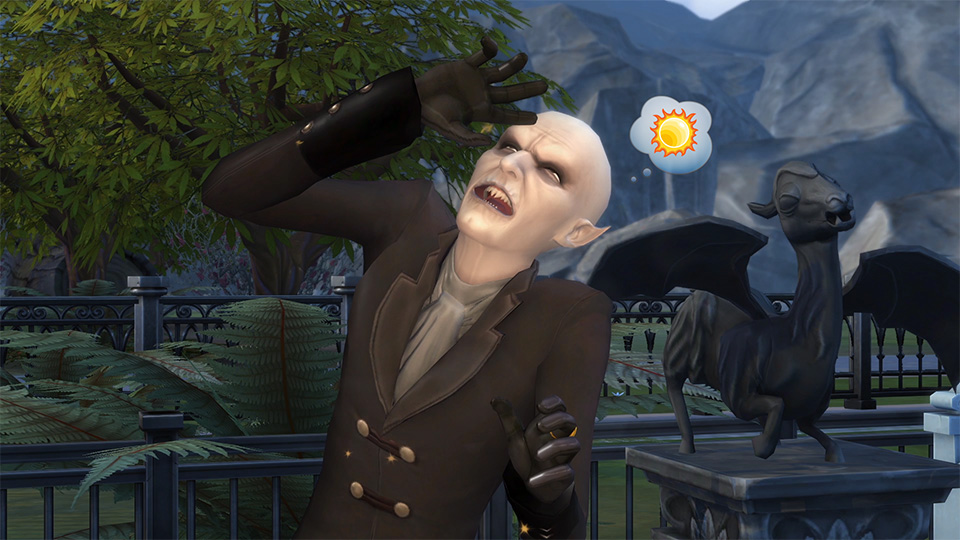 Of course, no Vampire home would be complete without the classic Vampire objects. Your Vampire Sim can spend their days avoiding daylight and playing the pipe organ, which has its own skill to level up. Oh, and one more little thing. There’s also new coffin beds, that your Vampire Sim can totally WooHoo in.

We’ll have even more information for you about this pack over the next two weeks, but we hope you’re as excited as we are! Come talk to us on Twitter, Facebook, Tumblr & Instagram, and tell us what you’re looking forward to most using #TS4Vampires