How to: Creating Fantasy Builds in The Sims 4 | SimsVIP

Home Guides and Tutorials How to: Creating Fantasy Builds in The Sims 4 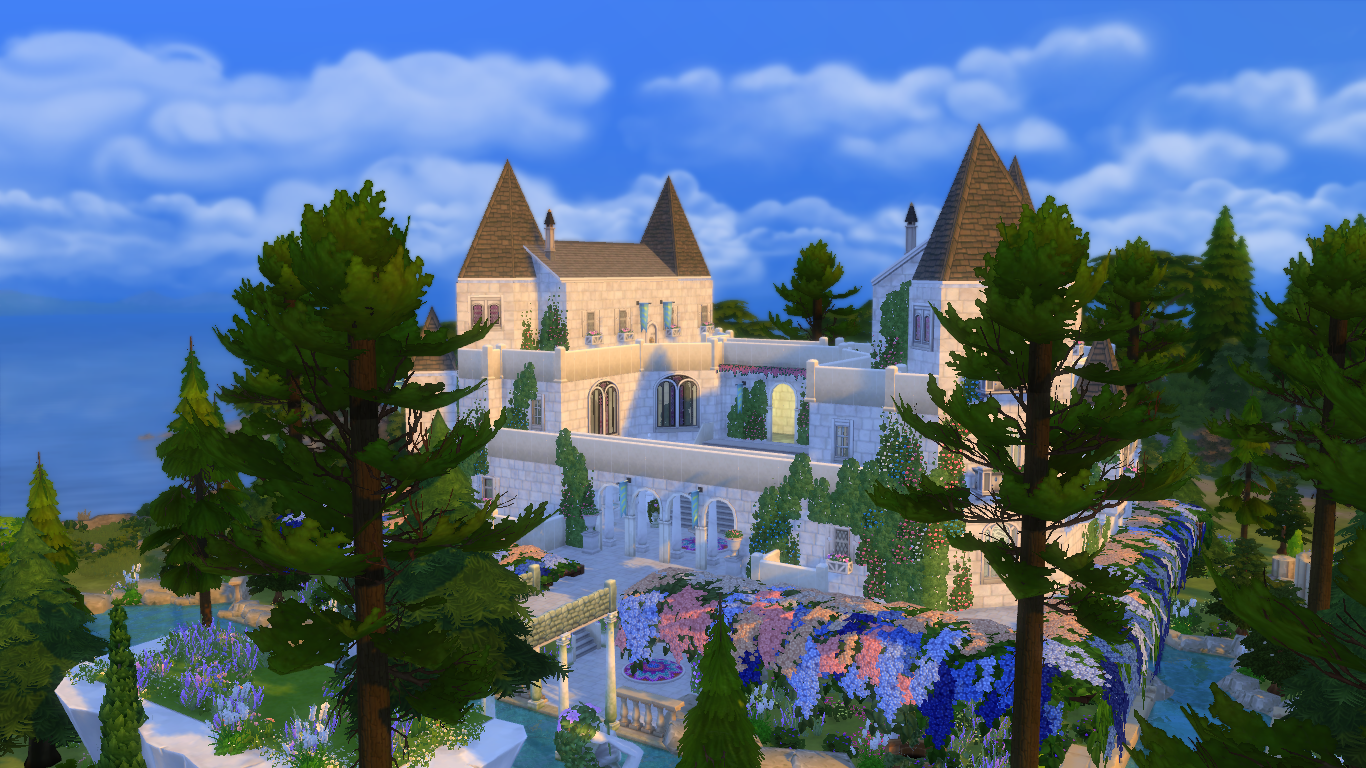 Creating a fantasy inspired build can seem challenging. The Gallery is littered with fairy castles, towering mansions and enchanted forests that leave you wondering just how they did it… Sure, fantasy builds may seem a little trickier than your average Willow Creek home but with a little imagination, inspiration and a few tips and tricks up your sleeve you’ll find them just as easy (and fun) as any other build!

One of the most fun things about creating fantasy builds in The Sims is the fact that you’re forced to experiment and test the limits of the game. Working out exactly how to make your vision possible is not always an easy task and can sometimes mean making a few mistakes before you find a solution!

The thing that really makes this build fantastical is the fact that it floats so it was essential that this element was perfect. I had visions of a spiralling staircase leading up to an imposing and grand castle and I wanted nothing more than for that to be my end product. Unfortunately, once I’d started building I realised this wasn’t going to work. To make a build float you first need to build a 1, 2 or 3 storey block, upon which you place a piece of flooring. After dragging the flooring to the size and shape you want, simply delete the block and you’re left with a floating foundation. In order to make my staircase I’d started with a 2 storey block. Since you’re restricted to building 4 floors above ground level in the Sims 4, I was left with only 2 storeys to play around with. Not exactly ideal considering I wanted to make huge Rapunzel-style towers. I was forced to compromise, rebuilding the entire structure with a 1 storey starting block instead. Don’t lose hope if something’s not working, things won’t always go to plan on the first try. 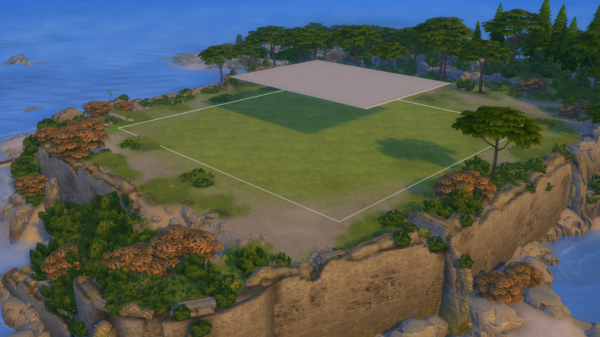 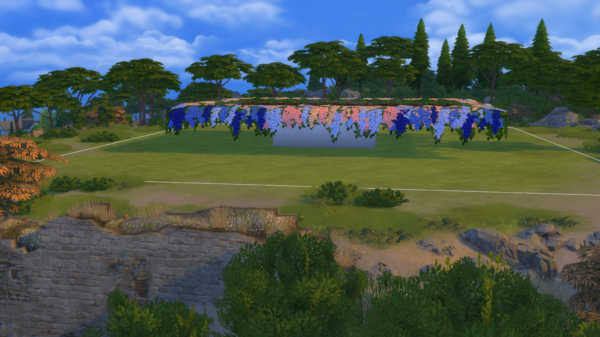 Once I’d got my foundations sorted it was time to move on to the actual building, the part of the process that involves the most trial and error. Although it may seem counterproductive, I’ve found that starting with one huge rectangular structure can actually be a really good way of getting into a build. Use the structure as a canvas and begin to add, take away and play around with the shape. Make balconies, indents and carve out interesting spaces. You don’t need a set plan. Experimentation can work just as well! 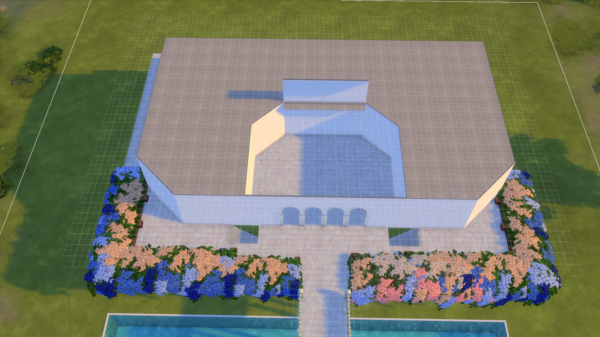 Roofing is always a bit tricky in The Sims 4, especially when you’re building something that isn’t just a square block. This build’s unusual shape meant I made mistake after mistake before finally creating something I was pleased with. It took some time but by layering roofs on top of one another, combining them into new structures and utilising all of the different styles paid off and I ended up with something that captured the essence of a fairy-tale castle. 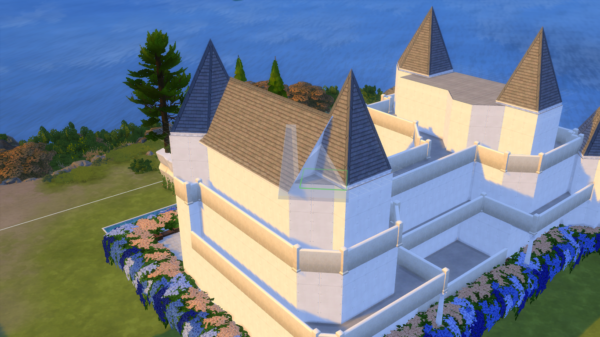 Although this worked for some of the rooms, there were still places that were impossible to roof. A great tip for building is to be flexible. When I realised that I wasn’t going to be able to create the roofs I wanted I simply changed the shape of the room to make it easier. Don’t be afraid to delete, change or move something, I promise the finished product will look much better for it. 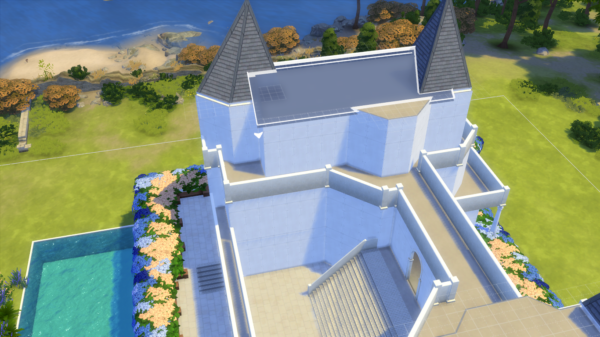 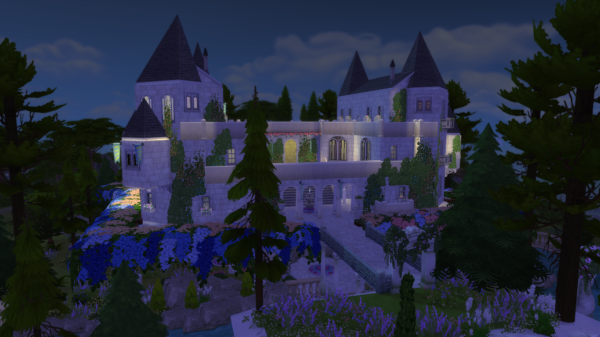 Fantasy builds generally mean big builds and that was definitely the case here. I know that starting on a giant structure can be daunting (and time consuming) but there are plenty of building tricks to help make the process a little swifter.

A few months ago the Sims team introduced a Copy Tool. Rooms, staircases and roofs can all be copied so you don’t have to waste your time rebuilding something from scratch. The copy tool was really useful in creating the towers. I made the base structure, copied the room and placed two identical versions on top. 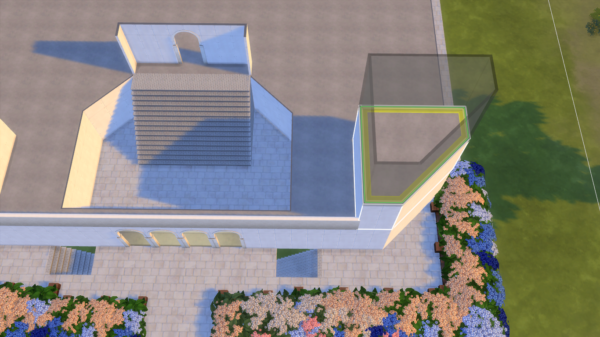 Because my castle was floating I was left with a lot of space underneath and around the build that needed landscaping. My vision of an enchanted forest teeming with colourful flowers and shrubs, however, would definitely take some work. Filling a 64×64 lot with plant-life, in turns out, is not a simple task. Fortunately it was made a lot easier through the use of the Shift Key. Holding down Shift whilst placing an object enables you to continuously place that same object over and over again without having to reselect anything. Using this meant I could easily place hundreds of individual plants very quickly whilst simultaneously creating a haphazard, wild looking forest that fit right in with the rest of the build. 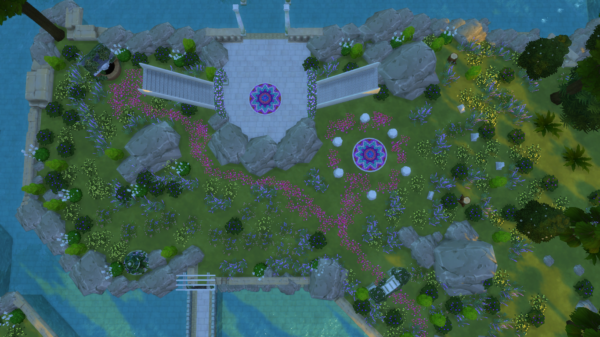 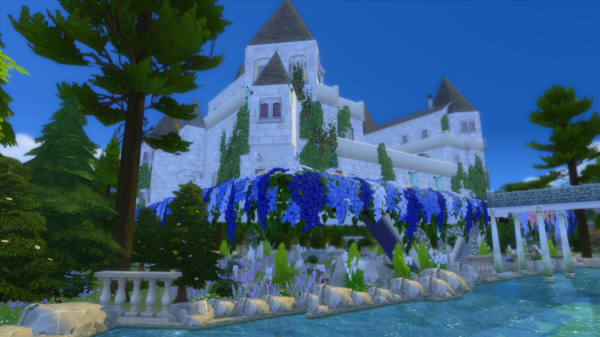 Because this build was fantasy inspired I wanted it to have an otherworldly and mystical feel inside and out. Once I had built the main structure, however, besides from the floating, it felt more medieval than magical. I’d already littered the exterior walls of the build with climbing vines and flowers but choosing to place these items inside as well as out added that much needed touch of fantasy to the decorating process. Although it seems strange at first, flowers managed to turn a relatively plain looking space into something enchanting and supernatural that suited my theme perfectly. 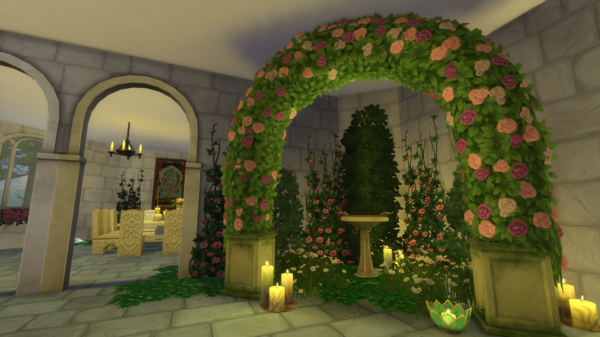 Some of my favourite features in this build are items I unlocked using the Buydebug cheat. Opening the Cheat Bar and typing in bb.showhiddenobjects will unlock a whole heap of items ordinarily only found in gameplay. From ponds, to plates to gravestones, there are tons of really useful objects that aren’t normally available in the Build/Buy catalogue. Simply type “debug” into the search bar and see what you can find. In this particular build I used fossils, Emotion Potions and gemstones to add detail to my library and grabbed the toilet and bathtub available through the woodworking table to create bathrooms that better suited the old-world style of the castle. 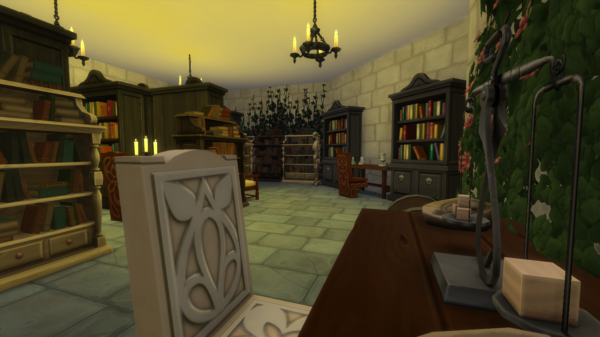 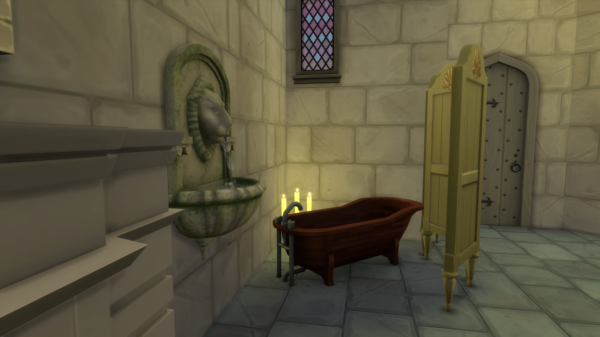 By experimenting, testing out new ideas and not being afraid to try something a little strange your creations can easily move beyond the ordinary. Build Mode is the perfect place to let your imagination run wild so find some inspiration, break free of the chains of normality and watch as your builds become that bit more magical! 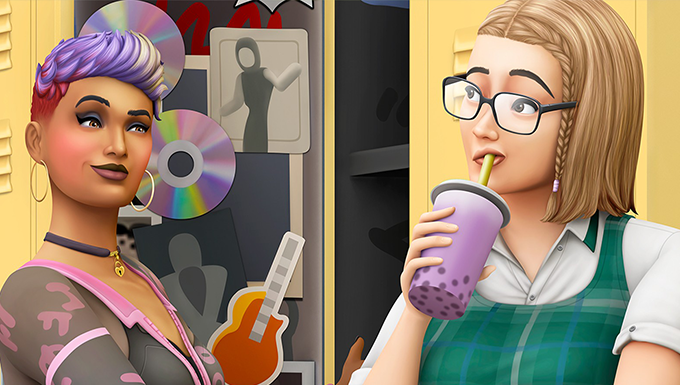