It’s that time again! Today was the broadcast for The Sims 4 Vampires Game Pack expected to release next Tuesday. The hour and a half long livestream was hosted by SimGuruNinja, SimGuruMegs, SimGuruGeorge, and SimGuruEmory, a team that walked us through the upcoming CAS, gameplay, and more that we can expect in the next DLC.

First, we saw Create A Sim, as usual. The CAS assets team truly took a step up when it came to the new Victorian and modern styles, mixing unique outfits with hidden skulls for that extra spooky yet elegant look.

The team debated about the question “What really is a -real- vampire” according to SimGuruNinja. So they decided that they wanted to make all the things!

The player will be able to create a vampire by clicking the plus sign (similar to creating an alien). Furthermore, in CAS they’ll be able to add a Dark Form as an alternate version of their Sim. They’ll also be able to click the X to delete the Dark Form completely from their Sim.

You’ll be able to add 10 new eye colors, 3 misshapen eyebrows, 3 sunken eye sockets, 4 eye details, 4 cheeks details with veins/cracks/age, 4 vampire mouth details, and 4 versions of Vampire teeth. All of these can have makeup applied to it as an overlay. For the less creatively inclined, there are Vampire Archetypes that will put these details on your currently created Sim.

All CAS assets are available for both regular and Dark Form, and they are also all available to all genders.While children won’t have Vampire powers until they are teens, they can have Vampire eyes.

There are three new Aspirations for the different kind of vampires. There aren’t any traits.

The world of Forgotten Hollow is a remote and dark town that has five lots. There are small hidden secrets around the world for players to find, but there wasn’t any mention of a hidden lot. (The boarded up cave seen in the trailer cannot be visited.) One is empty completely, two are occupied by premades, and two houses are open to moving into. IN the largest lot that overlooks Forgotten Hollow from a hill lives Count Vladislaus Straud, the lore oriented vampire introduced to us in the Community Blog.

The town is decorated with cemeteries and headstones, a veil of fog at night, many bare and brambly trees/shrubs, and is a unique world that has a longer night cycle than others.

Here are other key notes of Forgotten Hollow’s atmosphere: 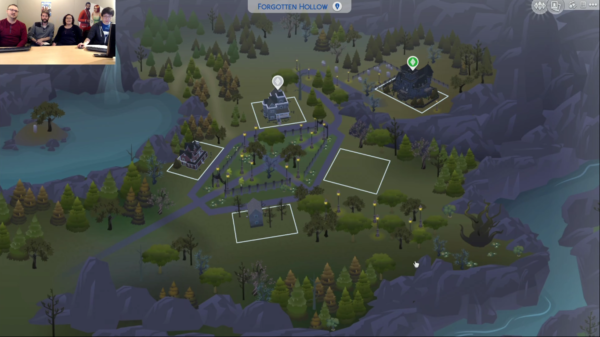 Three new lot traits will be available to lots anywhere in the game, no matter the world they are placed in.

It’s hard to build a lot with The Sims 4 Vampires game pack without a hint of elegance. Lots of tassles, stone, ornate objects have small hidden skulls. It’s safe to say that a lot of the pack is heavy in Build/Buy content which is perfect for builders. Some objects of note include: 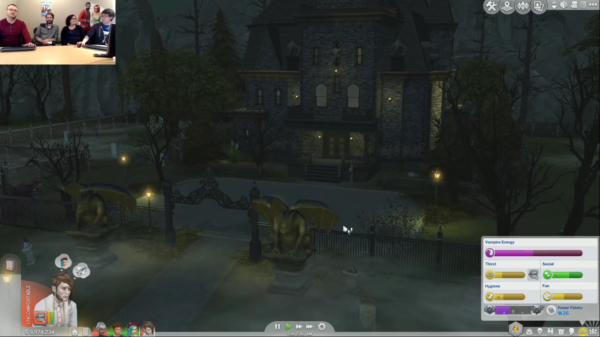 While these aren’t a gameplay object, they are deserving of some attention in their own right. The Vampires game pack will add over a dozen of these cracks, tears, stains, and so on. Better yet, they will not cost any simoleons to place on the lot and look great on windows as well. There are also ivy and brambly looking vines that are perfect for outdoor overgrowth.

These tombstones aren’t connected to any Sims and are perfect for cemetery lots. (No, we won’t get a Cemetery venue in this pack.) You can engrave an Epitaph on them to read when visiting, but there isn’t any other interaction to Mourn or Summon ghosts like with regular graves. 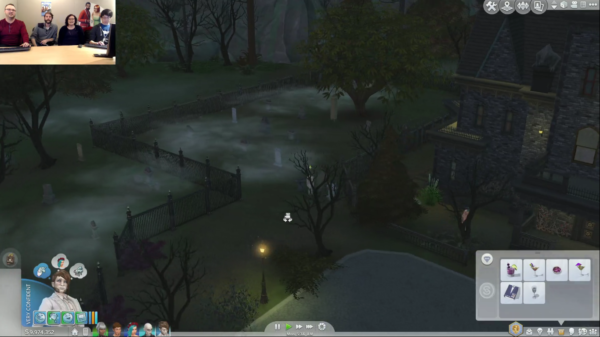 These are new gameplay objects that not only act as a bed but as a tombstone too. Vampires are able to Engrave an Epitaph, Read Epitaph, Sleep, Use, Claim, and Hibernate.

There are three new coffin types to choose from. There is a low-quality wooden box, a medium quality casket, and a more ornate and decorative coffin that looks fancy. All of these can be WooHooed in with a vampire. After an almost uncomfortable wait for it to stop bumping around, small bats form a heart shape at the end. 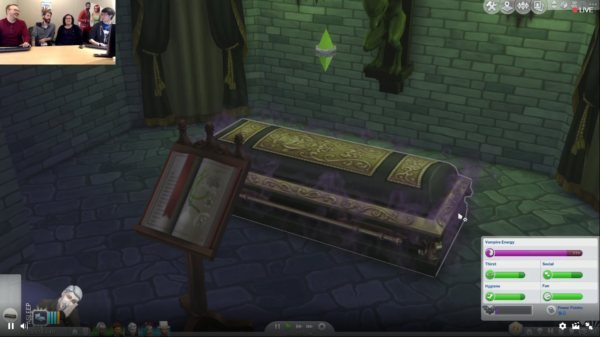 Vampires in The Sims 4 are unique and very different to regular Sims. Their motive panel is replaced with different needs and an experience bar. Typically, Vampires will need to fill Thirst, Social, Hygiene, and Fun. However, they will not need to use the restroom or sleep except to replenish the new Vampire Energy bar.

This is how Vampires use their powers and survive in sunlight. It can be replenished by sleeping or using the Dark Meditation interaction. The longer a Vampire is in sunlight, the more this motive decreases, but they can take refuge as long as there is something blocking the sun above. Vampires will burn to death in the sunlight. 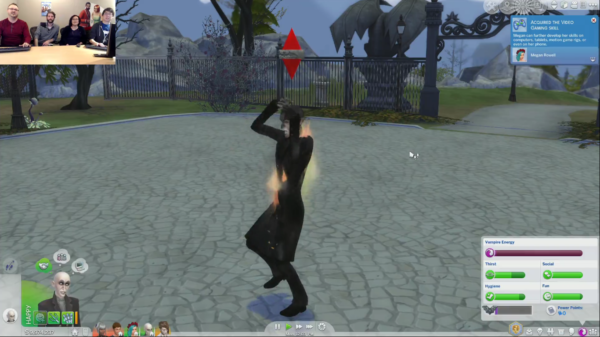 When a Vampire interacts with a coffin, they can choose to sleep or Hibernate for a long period of time. They will sometimes have “daymares” during the day time.

Vampires will be able to ask a Sim to take a polite drink. Being friends will increase the chances of the Sim agreeing. However, they are also able to force taking a drink from them which will decrease their relationship. Drinking Plasma will increase experience towards their Vampire Rank.

Using the Compel for a Deep Drink interaction might make Sims pass out. And yes, there will be bite marks. 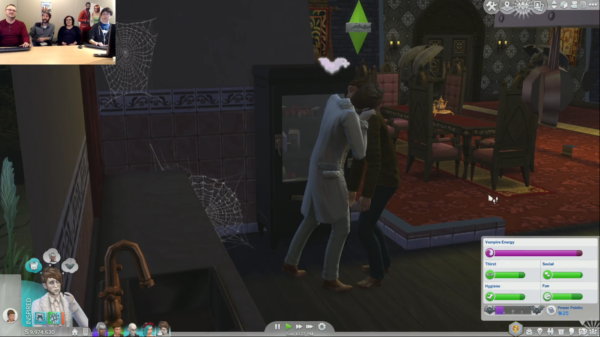 For Vampires that opt not to drink from other Sims, the fruit can be found on the glowing purple Plasma Tree in the dark of the woods. This fruit will fill the Thirst motive. 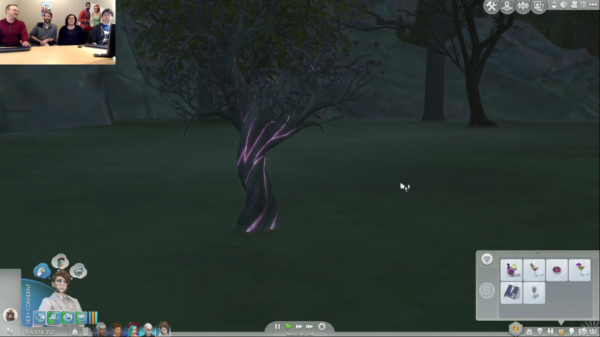 There are five ranks for Vampires to work their way through to gain Powers and become stronger. When a Vampire ranks up, it seems more Powers might be unlocked to them.

As your Vampire uses their powers, drink, and use various other interactions, they will gain experience and Power Points to spend on a skill tree. There are 25 Powers and 11 Weaknesses, and some have multiple levels to vary the degree of effect.

Some of these Powers include Irresistible Slumber, Supernatural Speed, Mesmerize, a way to lower needs, project mood auras, mist form to teleport with, and more. Weaknesses include Withered Stomach, Uncontrollable Hissing, and a weakness to the sun with Thin Skinned. The third level of Thin Skinned is described as “You’re gonna die.” 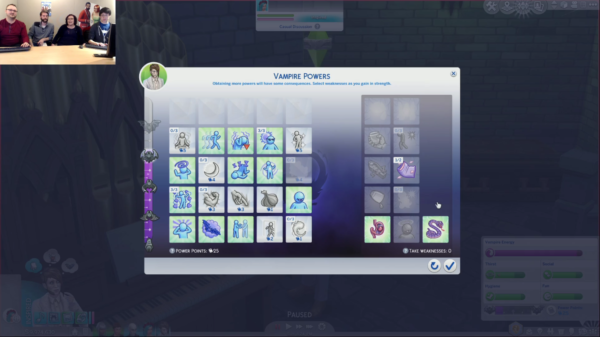 Many interactions depend on whether your Vampire is talking to another Vampire or a regular Sim. If they have the right Powers, Vampires can also command other Vampires to do their bidding. Here are some interactions that you might see:

When a Vampire turns another Sim, they will go through a process of transformation. The Sim will no longer fill their Hunger motive when eating and will slowly starve to death. Once the process is finished, they will become a Vampire. Those turned this way will have a randomly generated Dark Form. Vampires cannot autonomously turn other Sims.

Hunting for vampires is very possible in this game pack. After creating the potion, your Sim/Vampire can pick a fight with a Vampire and throw the cure at them, forcing them to be healed. It’s important to know Vampire Lore skill to cure Vampires.

Read to learn more about Vampires from the computer or books. This is a 15 level skill that is unique compared to other skills in the game.

This is a 10 level skill that unlocks more and more songs that are available. Sims will be able to write songs, play songs, pluck at it for inspiration, practice, and even play haunting music with wispy spirit animations coming out of the organ.

While many of the songs (called Cinema songs) are familiar with creepy sounds, not all of them will be spooky. In fact, some of the types of music include Theme, Avant-garde, Cinema, Jazz, Circus, Gospel, Classical, Drama. 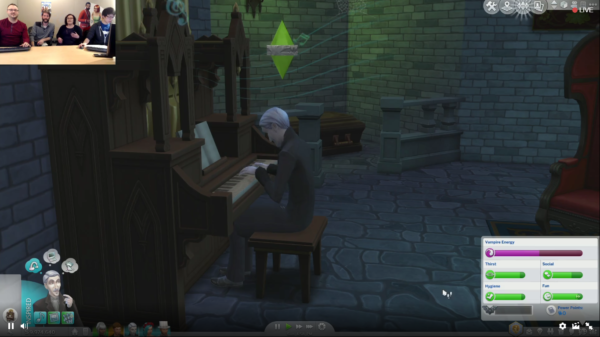 As always, there are many new recipes to find in The Sims 4 Vampires pack. Some of these new drinks and potions will even affect your gameplay.

The Sims team says this is just the tip of the iceberg for The Sims 4 Vampires Game Pack. Will you be picking up this pack next Tuesday? What did you notice in the broadcast that we missed?

Let us know what you think in the comments below!