For several weeks now players have been patiently waiting for a new game announcement for The Sims 4, and with EA Play 11 days away, many expected announcements prior to the event. Today, SimGuruGibson “made an oopsie” by revealing that all game announcements are going to be made at EA Play. He quickly deleted the tweet and issued an apology for the “misinformation” stating he is not aware of what the marketing team has planned. 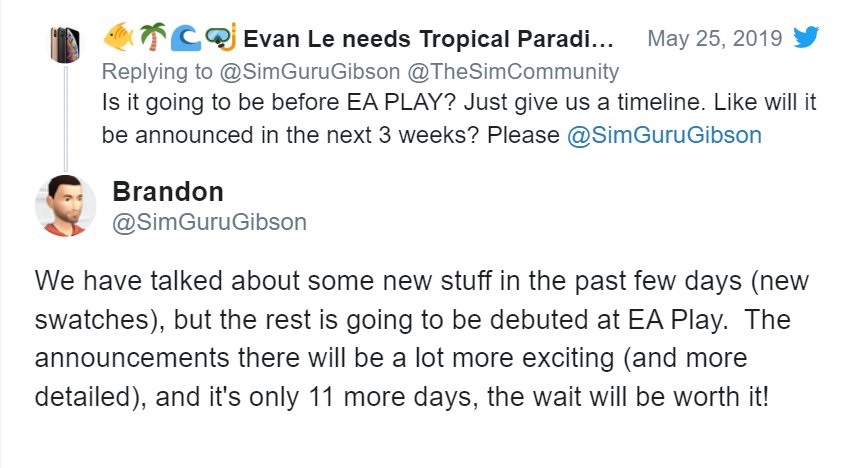 Sorry for any misinformation everyone, I feel pretty silly. To be clear, we do plan on talking about Sims 4 content at EA Play, but I shouldn't have declared anything about content/releases considering I'm not involved in deciding when/how we talk about new content. Thanks!

Sorry, I mis-spoke. Please see my updated tweet, but the point I was getting across is that we DO have things planned to talk about at EA Play, and I'm not aware of anything that will be announced about outside of EA Play.

Now it’s likely he’s being sincere and honest that he doesn’t really know anything as he’s not involved in how and when Maxis speaks about new content, but a more recent tweet signals that we will be getting our “big announcement” at EA Play. (After all, he is the Gameplay Engineer for The Sims 4, so he knows something about it.)

I'm pretty excited for what we'll be showing off at EA Play, but… pic.twitter.com/aiF7RJ5h17

EA Play runs June 7th, to June 9th, 2019. Electronic Arts announced this year that they are going to host multiple live streams instead of a regular press conference, so it’s not clear how they will present announcements during the stream.