Happy 5th anniversary, The Sims™ 4 players! We’ve been through so much as a community and, really, we want to thank you for your continued support. You’re an inspiration to everyone who works on The Sims, and we feel lucky to have such a passionate worldwide community. It’s because of this that we’re so excited to share a commemorative update featuring patio furniture, configurable stairs, and clothing and objects inspired by Muslim culture. To get some insider info on the development of this update, we spoke to SimGuruGraham, a producer on the team. Check out the interview below and be sure to patch your game ASAP to enjoy some fresh content. 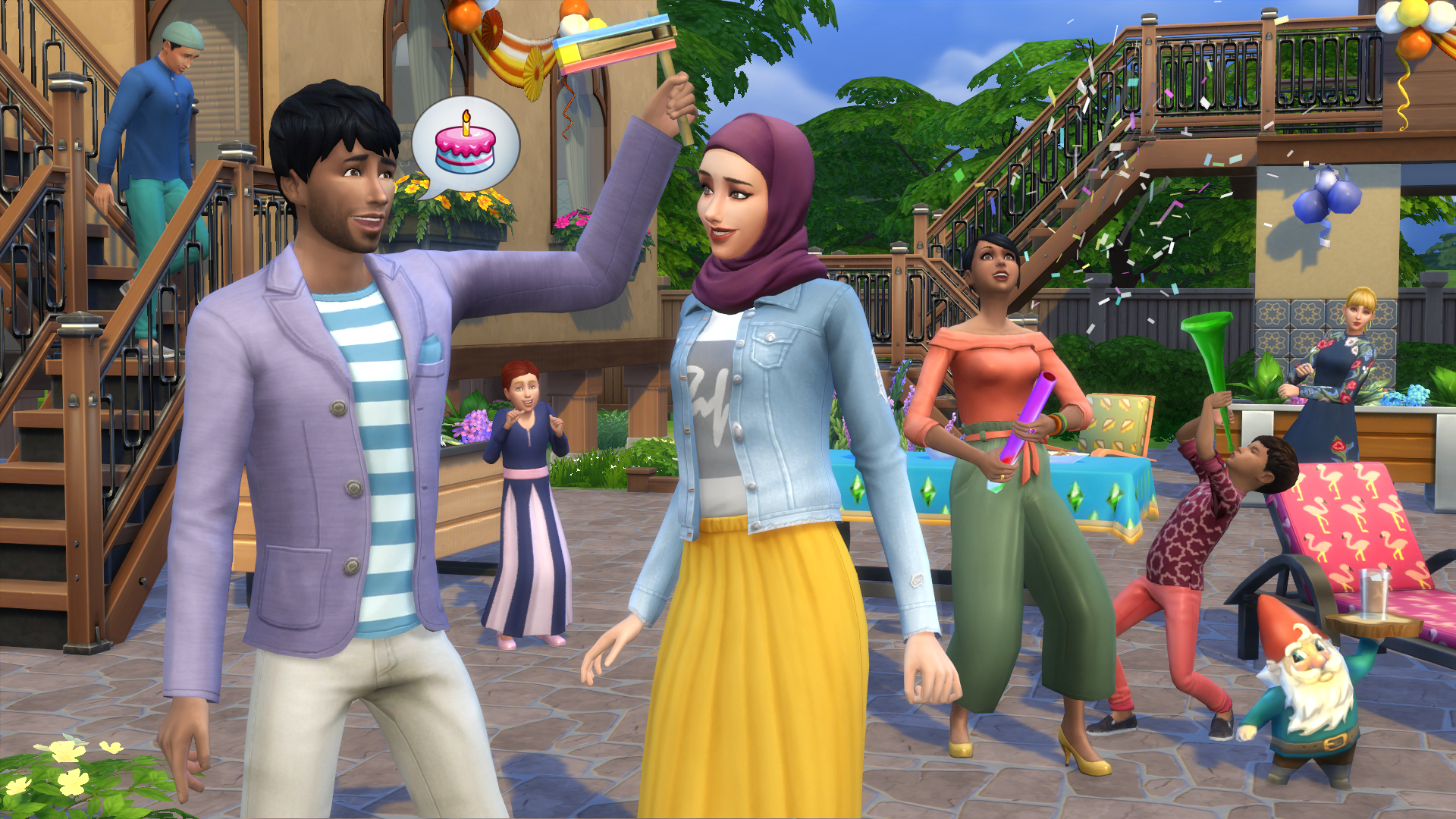 Hi, Graham! Tell us a little about what you do on The Sims?

In my ten years with Maxis, I’ve worked exclusively on The Sims 3 and The Sims 4 as a producer. I greatly enjoy production, as it involves many shifting responsibilities at different points during development, and I get to see each project all the way through, from the early concepts to the moment they arrive in players’ hands. An aspect of production that I find particularly rewarding is being an advocate for our community of players, representing their interests, and pushing the team to consider how our ideas and creations will be viewed through their perspective.

The fifth anniversary update looks awesome! What can players expect from this patch?

I wholeheartedly agree! You’ll find a bunch of new things in this update; there’s a bit of something for everyone. We’re excited to introduce new clothing and objects inspired by Muslim culture to enable even more Simmers around the world to explore their own self-expression. This includes a clothing line with traditional and more modern looks for adults, plus new outfits for children. For the fifth anniversary itself, we envisioned inviting friends and family over for an end-of-summer get together. You’ll find sets of colorful, casual, summer wear for your Sims, and a full suite of patio furniture to set the scene for a celebration. Finally, configurable stairs are landing in The Sims 4! The community has long expressed a desire for more versatility when building with stairs, and this newly-introduced functionality will allow players to push, pull, and shape stairs at their whim – just like they’ve come to expect from other build tools within the game. L-Shaped, U-Shaped, Z-Shaped stairs — they’re all possible, and more!

There are lots of clothing, objects, and home items in this update. From where did you draw inspiration?

When we discussed adding a set of clothing and objects to celebrate The Sims 4’s fifth anniversary, we wanted to ensure the things we created would contain fun references to The Sims, but would still be versatile additions that could be incorporated into any wardrobe or home. We loved the idea of an outdoor celebration between groups of friends, and some things that were added to the game this year – such as lounge chairs and stilted foundations – led us to rally around the idea of a fresh patio set. The furniture itself incorporates a variety of looks, from solid colors to fun patterns – including series staples like plumbobs, grilled cheese, and flamingos.

Incorporating clothing and architectural elements inspired by Muslim culture was an opportunity for some of us on the team to learn from others and provide more ways for our players to tell stories in game that are relevant to their own experiences. One great benefit of working at EA is that as a global company, we have colleagues we can chat with and discuss how best to represent styles, patterns, and colors from their culture in authentic ways. We also reached outside of EA to consult with various people who shared insights from their own life experiences, including a fashion designer who specializes in this area, who helped refine our selections. I’d say the biggest victory is knowing that this will give more of our players the ability to represent themselves, which has been fantastic to see over the course of The Sims 4 – such as with the Lunar New Year content earlier this spring, and the Caribbean content last fall.

How will this update change the way you play The Sims 4?

For me personally, it’s all about the configurable stairs. You can now take any set of stairs in the game and turn it 90 or 180 degrees. The tools for adjusting this are really intuitive, as well. You just grab the middle of the stairs and bend, and a landing will be created. You can then drag that landing up and down the stairs to adjust its height. You can even turn a single set of stairs a second, third, fourth . . . really, there’s no limit to the number of times they can be bent. Whether you create a surreal M.C. Escher-esque vision of stairs turning every which way, or just incorporate a simple set of space-efficient L-shaped stairs into a Sim’s home, this is another great tool that will unleash builders’ creativity.