SimGuruGraham: "There's More We Can Still Do With The Sims 4" | SimsVIP

In an interview with GamesRadar, SimGuruGraham states that he believes there’s still room for growth in The Sims 4, and that the players are “plenty hungry” for more content. Check out the entire interview over at GamesRadar.

However, there’s only so much that can be done to a base game that’s six years old, and if the fake YouTube trailers have anything to say about it, The Sims 5 is at the forefront of the community’s hive mind. While there will be “some improvements” to The Sims 4 on Xbox Series X and PS5, there doesn’t seem to be any plans to ride the next-gen wave with a new title anytime soon. For EA, the Sims 4 well hasn’t run dry. For EA, the Sims 4 well hasn’t run dry.

“There’s such a diverse range of topics and features that we could cover, the possibility space of what we can do within The Sims 4 is just humongous,” Nardone tells me when I ask about the potential of a new game. “I think that just goes to show that there’s way more that we can still do within this title, and our players are plenty hungry for more content that we can give in. That’s a good problem to have.” 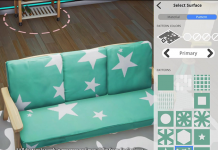