The Sims team has released the official announcement blog on today’s addition of pronouns in The Sims 4 via game patch. Check out the details below!

Hello Simmers! SimGuruDuck here to give you a peek into the brand new update to the game that will make it possible to add custom pronouns to Sims in Create a Sim. 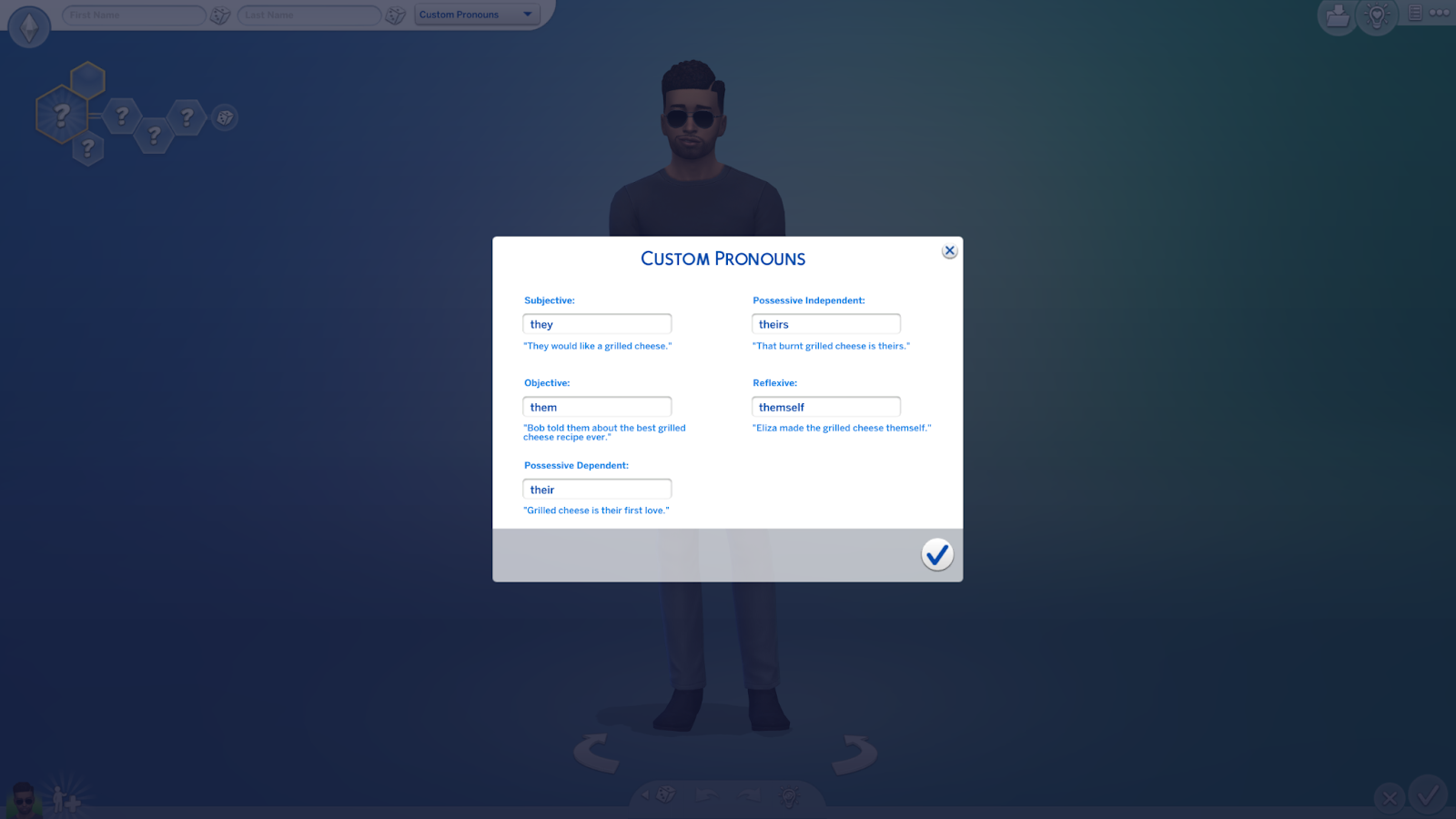 We first announced that we were looking into this feature last year after hearing feedback from the community, however this is something that has actually been on our minds for quite some time before we announced it formally. As with our vibrant community of Simmers, our development team is an extremely talented and diverse group of folks that brings various perspectives into the content that we create. So, we decided to come forward with information about our investigation into the addition of customizable pronouns in The Sims™ 4.

We began our research in two ways. First we started looking into the game itself to see how we could approach the addition of customizable pronouns. We went through a couple of different explorations, but ultimately where we landed was to create a system that allows for pronouns to be defined by the player and have those then be used in multiple different text strings. This was achieved through creation of new tokens, or bits of text that are reused, that support custom input from players.

The other aspect of research that we did was around the importance of including customizable pronouns to be more inclusive of folks from different lived experiences. We reached out to the It Gets Better Project and GLAAD and worked with them to learn more about how pronouns are used, particularly by trans and nonbinary people. Through this research and through doing a deep dive into the game, we’ve learned about all of the different complex areas that binary gender was present in The Sims 4. From here we then worked with our team to come up with some wireframe designs to help us work on making this feature a reality.

HOW TO CUSTOMIZE YOUR PRONOUNS IN THE SIMS 4

You’ll be able to change the pronouns of Sims you create in Create a Sim.

This first version focuses on customizable pronouns in English only, but our intent is to update and expand this feature over time. These updates will allow us to ensure we’re catching areas where the conversion may not be taking place right away, so we can continue to make the feature even better.

The feature has been fully tested and works to change out instances of default pronouns to the custom ones you may have chosen, however there may be times where the feature doesn’t choose the correct form pronoun or it uses the default pronoun of the assigned gender. This is due to several factors such as the complexity of how the feature was implemented, as well as rules around conjugation in English. An example of something you might see is “They likes…”. In this situation, the correct grammatical structure should be “They like…,” The feature works by  replacing the pronoun token itself rather than the pronoun and the following verb. In the future we’ll be working to make sure that the text is crafted in a way that reduces this type of issue, but we will work to fix instances of this when found in previously released content. If you notice anything that may be off, please let us know by posting a screenshot in this Answers HQ thread.

This first update for customizable pronouns to be supported in English is a step in the direction of a more inclusive experience for Simmers, and I’m excited to see how we’ll be able to evolve the game and feature over time to support more languages. While this update isnt the be-all end-all of representation of nonbinary and other gender diverse folks, we strongly feel that it’s important for us to approach better inclusivity over time as we figure out ways to work within the limitations of our code.

We don’t have anything to share about the roll out to additional languages yet, but stay tuned to our social media channels as we’ll share more info once it’s available.

We’re looking forward to seeing players’ reactions to this new feature in The Sims 4.