IGN has a preview of Hidden Springs, giving us some full details on what the town is included with!  Among the 50 Townies…. are 15 new decor items and 6 new outfits.  The only extra gameplay content seems to be The Fountain of youth, which works like the “Young Again” potion from Generations.  There is also mention of a Sim inheriting the Childish Trait as a result of a failed attempt at the Fountain of Youth.

Thanks to Jeff Carter for the tip!

If you’ve grown bored with Sunset Valley and Riverview, EA is releasing a new city called Hidden Springs on August 25. This isn’t an expansion and there’s no price yet, but it includes 50 new playable Sims, 15 new decoration items & six new outfits.

Inspired by Aspen and Lake Tahoe in the summer, I got a chance to look at Hidden Springs yesterday and it’s pretty cool. It’s a nice mix of urban and woodsy but the new families are the best part. There’s a “royal” family (the parents are Leaders of the Free World) complete with dashing son and rebellious daughter who ran away to the woods to become a hippie. Then there’s old Grandma Shue with all her adopted children, a Cinderella-inspired family and a wacky journalist with a bright pink house. 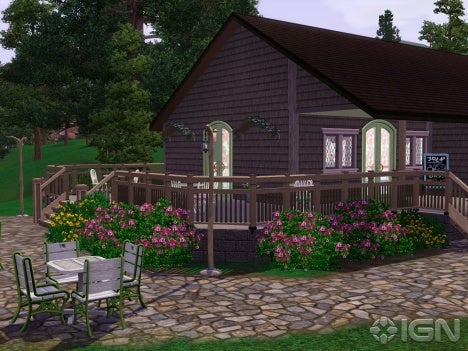 There’s also a Fountain of Youth. If you can find it (it’s tucked away pretty well), your Sim can drink from it and that will prevent aging for 24 hours. You can also take a chance and wish for youth, which will freeze you at your current age if you’re a young adult or transform you back to a young adult if your Sim is older. It won’t work every time though, and you run the risk of one or your Sims traits being switched to Childish (a.k.a. they’ll act like a fool). Worth the risk, in my opinion.