EA France & French Singer Shy’m have teamed up to host a series of web casts for the Sims 3 Pets!  Thanks to SimCookie, we now know this 2 week long web series will be begin tomorrow!

Electronic Arts is going all out for the launch of The Sims 3 Pets & Cie, October 20. The singer Shy’m and adorable chihuahua Warhol were chosen to represent the next game of the license of Sims. Their adventure will be unveiled in a web series of four episodes made by Electronic Arts to discover very soon! Visit the studios of the game during a trip to San Francisco, Simlish recording of his latest single, exclusive interview with the singer … will be waiting for you. 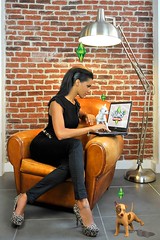 Sims fan and friend of animals from an early age, Shy’m  reveals for the first time the public its “gamer” by becoming  the muse to France’s new game The Sims ™ Pet & Co.
“I love playing since I was young. I’ve always been behind a  console. I actually started playing the Sims since the start of  the saga! “Confides Shy’m.

To assist in this mission, Shy’m can count on his loyal four-  legged Warhol, an adorable little chihuahua white, offered by  Electronic Arts for the occasion.

The Web Series: Shy’m and Warhol to the discovery of Sims 3:  Pets!

To share this adventure for fans of the license and Shy’m, Electronic Arts team has followed since the beginning of August the new ambassador of Sims and his puppy Warhol. Unique moments that will be unveiled as part of a series of four webisodes: Interview Shy’m, trip to San Francisco, meetings with developers of the game etc.. Discover the Sims 3 Pets & Cie in the company of Warhol and Shy’m!

The first episode of the series will be shown Sept. 16 on the You Tube channel: http://www.youtube.com/user/LesSims

Shy’m will also be recording one of her many hits “Tourne” in Simlish!  Take a look at the video below to watch Shym’s soon to be Simlish song!