The international games community is waiting impatiently for the start of the world’s largest fair and event highlight for interactive entertainment. From the 15th to the 19th August the international games industry will be in Cologne to show their latest innovations from the world of interactive entertainment. More than 300 world, European and German premieres from every segment of the games world we be available to be played for the every first time in Cologne. From new products in the PC and console sectors and online and browser games too, right across the board to mobile games, there will be something to thrill every games fan.

Gamescom will once again become the international stage for spectacular innovations from the games industry. Among the more than 300 premieres are numerous world premieres which games fans from all over the world are already looking forward to today”, commented Tim Endres, gamescom Project Manager, giving a foretaste of exhibitors’ anticipated presentations.

First line ups already public
The first big players have announced their new product line ups even earlier than ever. The presentations and premieres from among others, Blizzard Entertainment, Capcom, Electronic Arts and KONAMI are already promising some huge entertainment.

“World of Warcraft – Mists of Pandaria” and “Starcraft – Heart of the Swarm” from Blizzard Entertainment will be presented in Cologne. Electronic Arts will be showing with along its new football games, “FIFA 13” and “Football Manager 13”, “Crysis 3”, “Medal of Honor – Warfighter”, “Need for Speed – Most Wanted”, “Sim City” and “Star Wars: “The Old Republic”. Resident Evil 6, Lost Planet 3 and Devil May Cry from Capcom will also be guaranteeing the best in interactive entertainment. KONAMI in addition to “PES 2013” and “Metal Gear Rising” will also be presenting: “Revengeance” and “Castlevania: Lords of Shadow – Mirror of Fate” to games fans in Cologne. More line ups are to be announced shortly.

First press conferences announced.
Numerous companies will be presenting their premieres in the course of large press conference events. The kick-off event for this year’s gamescom will be taking place on the Wednesday at 10:00 am topped by this year’s partner country Korea in the North Congress Centre at the Koelnmesse site, the rest of the day will also see events from Ubisoft and Nexon, among others. Sony, Capcom and Electronic Arts will be presenting their new titles and making other announcements at their own press conferences ahead of the show. 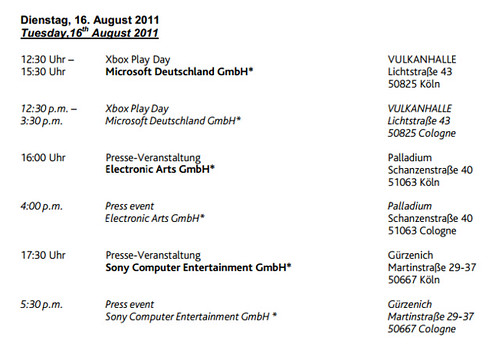 Official Statement: The Sims Will Not Attend Gamescom 2018