A small disclaimer up front. While writing this article I found out most of the normal screenshots I took during the hands-on session are “broken”. They are either grey or empty, which in both cases just means they are corrupt. Now I don’t want to whine about this. But we did notice during the event that the computer we were playing on had some issues. Not enough diskspace for example. And when it was time to copy the screens onto our USB sticks, it just failed with each try. Looking back, I think the lack if diskspace is what caused the regular in-game screenshots to have failed.

I took a lot of screens and in the end I only had a few on my USB stick, of which 90% was corrupted. Luckily we did manage to get some Fraps printscreens (those were saved to another partition) with UI elements, which helped me a lot in writing this article. I also borrowed a couple of screenshots from my friends at Simlicious and Simparool, with their permission of course. So a big thanks goes out to them! 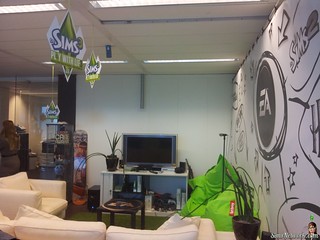 Second disclaimer: I played The Sims 3 Supernatural in Dutch, meaning I had to translate everything from Dutch to English. And that is (and will always be) harder for me than translating from English to Dutch. I always write my English articles first and then translate them into Dutch. There was no English game available at the event as far as I know. So therefore I would like to apologize for some weird translations. I hope you still understand what I am trying to say.