We played The Sims 3: Supernatural in London on its preview tour. So what have Sims fans got to look forward to when it’s released in September? 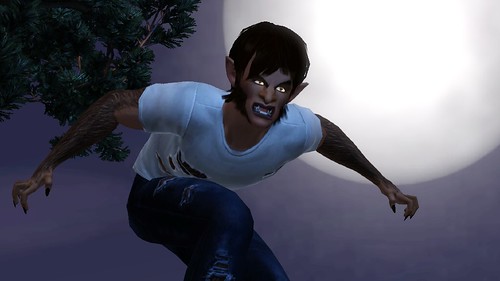 These furry creatures are determined by the new lunar cycle feature, which determines when a werewolf will transform, although they also transform if their mood becomes low or they are angry. Werewolves’ howls can be heard from anywhere in the town, particularly under a full moon. They can spread their power by biting another Sim (requires a certain amount of relationship) or by mating with a normal Sim (50/50 chance of child being a werewolf). Werewolves can form packs if relationships are high enough, and thereby hunt in packs around the neighbourhood. They have similar characteristics to dogs, for example they like destroying furniture, and my Sim in particular enjoyed crouching on her chair and guzzling her food down animal-style!