This may surprise you, but I’ve always been a console Sims player. Blasphemy, I know. From The Sims andThe Sims 2 on PS2 to The Sims 3 and The Sims 3 Pets on Xbox 360, I coped with the D-pad and analog stick controls in my bumbling bubble of bliss. Then The Sims 3 Supernatural for PC came through our mailbox and, as I kept glancing at it from a distance, it gradually gnawed into my unconscious like a psychic vampire until it convinced me to turn. I am now a PC bloodsucker. 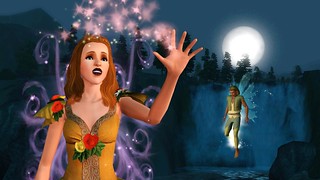 The Sims 3 Supernatural expansion pack revolves around the eerie town of Moonlight Falls, a clearly open-minded suburb where werewolves, vampires, witches, fairies, and regular Sims mingle together like an extended community of Addams Families. Of course, you’re not forced to start a new game in Moonlight Falls to rein in the new supernatural forces, but the preset town does already incorporate some of the added community lots like an elixir store and a supernatural hangout. The expansion pack also allows you to create a supernatural racial type from the Create A Sim editor, so that you don’t have to convince a vampire to bite you or commit suicide to become a ghost.