It’s that time of year again, the time when our thoughts turn not only to giving thanks but to pondering “What should I eat next?” Yes, whether you’re sidling up to a buffet at a party or sitting down for a formal holiday meal, food is topmost on our minds at this time of year. We asked Graham Nardone, our feature producer for The Sims 3 Seasons Expansion Pack, about his favorite foods and seasonal food stories. The results were enough to whet anyone’s appetite! 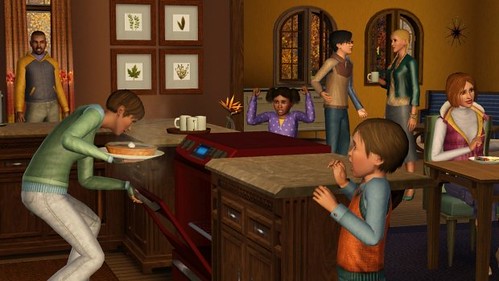 Let Them Eat Pie! – When I was a kid, my family adopted two big greyhounds as pets. While most of my stories with them involve them getting off their leashes and us trying to catch them (good luck!), there is one particular memory I have with them involving food. Now, my family was never particularly big on the idea of cooking a large meal come Thanksgiving – more often than not we’d head out to a restaurant and enjoy the food with none of the work. One year in particular though, my mom wanted to give cooking ‘the big’ Thanksgiving dinner a try and, as anyone who has been involved with preparing one knows, it’s a full day ordeal. Finally dinner was served and we were just digging in to all of the food piled high on the table when we heard a commotion in the kitchen. Our two greyhounds had put their paws up on the counter and were devouring our pumpkin pie dessert! Thankfully the best part of Thanksgiving is there’s never any shortage of food, so even without a pie nobody left the table hungry that year… even the pets! It made me smile when we released The Sims 3 Pets and you could put plates of food down outside for wildlife to eat. I’ll have to set a slice of pumpkin pie out sometime and see how they like it!

Good Things Come to Those Who Wait – I have to confess, I love drinking eggnog when December rolls around each year. I would never spike it with “juice” either; give me that delicious eggnog goodness straight up! They say absence makes the heart grow fonder, and if the same thing can be applied to food, then eggnog is what I crave those other 11 months. My household had a very strict rule while growing up with a hard limit of one carton of eggnog per year. It really made me savor every moment when the holidays rolled around. Thankfully my Sims can indulge all they want with a quick trip to the winter festival, mmm yum!

Would You Like Fries With That? – One of my favorite additions to the game are all the different types of French fries. When we were in the concept states of The Sims 3 Seasons, someone suggested adding garlic fries to the festivals and it suddenly struck us – we’d never introduced regular French fries for Sims to nosh in the first place! From there we went a little crazy with seasonal variations: normal fries, garlic fries, chili cheese fries, even the recent tasty trend of sweet potato fries made it in. They’re just the type of food you can’t skip when going to a county festival, and now your Sims will enjoy chowing down on them as well.