The following tweet was shared by Humble Bundle today:

The Humble Bundle is a deal between EA and five charities, where players pay what they want for a bundle of games and EA donates the proceeds to charity. Donation amounts are entirely up to those who donate, and all they’re hoping is you donate at least five dollars (American) to charity.

The game codes are all for PCs, with Sims 3 being the only one that also has a Mac code. Those who donate are guaranteed to get Dead Space, Burnout Paradise: The Ultimate Box, Crisis 2 Maximum Edition, Mirror’s Edge, Dead Space 3, and Medal of Honor. If you donate and beat the average (which was $4.71 when I looked), you will also get The Sims 3, The Sims 3 Starter Pack, and Battlefield 3.

The charities are the Human Rights Campaign, Watsi, the San Francisco AIDS Foundation, the American Red Cross, and the American Cancer Society.

Update to clarify information: According to an Origin tweet, anyone in the world may participate as long as they have Origin.

Amazon Sale: Up to 75% off Select Sims 4 Titles 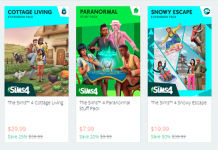 Origin Sale: Save up to 75% on Select Sims 4 Titles

Origin Sale: Save up to 89% on Select Sims 4 Titles