I admit it: I had more fun with this stuff pack than I should. That’s part of why this article is so late; I was busy having fun with the stuff pack!

One of the first things I did was to redecorate a bit. I decided to do a poor man’s superhero setup, with just a hint that some of their costumes and props came from an old movie set buried in the basement. So, I left a few hints around the house about the old movies.

Admittedly, I had some issues when I got to the clothing. It came down to picking outfits that looked good, instead of just being superhero for the fun of it, for three of the sims I used. The fourth got a superhero outfit just because. Luckily, the first sim I dressed was easy to pick an outfit for, which looked lovely and matched her personality a bit: 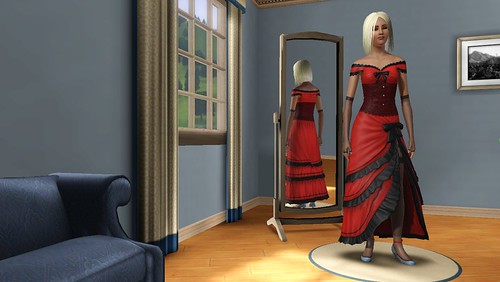 The second sim also wasn’t difficult. Though, I was tempted to go for the pink corset with stockings and call him Captain Can-Can!

And is it just me, or does this one resemble the outfit of the White Power Ranger? 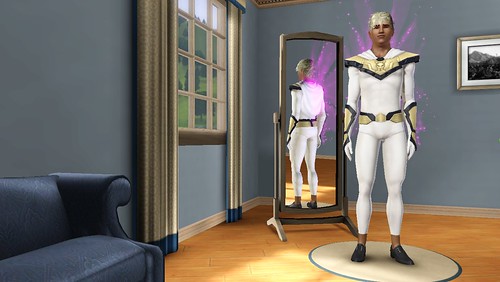 Then came time for the alien. She was rather more difficult to dress, and I almost made her a hero, but I was saving the hero bit for the last sim…

And last, but not least, introducing the superhero of the bunch… Lightning Flash! One kick from her and everyone in the room is stunned! She has been known to feed people who tick her off to Fluffy, so I guess she’s more of an anti-hero.

I will say this stuff pack came with a few surprises for me. The most pleasant one is that you can enchant the superhero wardrobe with a witch in the same way as a regular wardrobe. So, if you want to go with a superhero bedroom theme and be able to enter a magical portal, you can. The batmobile car is a speed 10, making it a viable mode of transportation for rich sims, and the spookier decor can fit in with Moonlit Falls decor while the western stuff wouldn’t look out of place in Appaloosa. The outfits generally follow the same theme as the decor, and I’m actually surprised we didn’t get some of the outfits seen in this stuff pack with Pets.

Admittedly, I didn’t make as much use of the stuff as I could have, but I did not want to overdo it just yet. Plus, I didn’t want to reveal a real superhero setup just yet. After all, Batman doesn’t give tours of the Batcave 😉

Overall? Worth the money, if you enjoy this kind of decor, and the outfits can be used in a lot more situations than just movie-related ones. 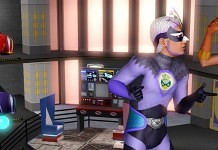