The Sims 3 Into the Future is the eleventh and final full expansion coming to The Sims 3. The new game will take players to the futuristic world of Oasis Landing where Simscharacters can live in a new world affected by what happens in the past. The Sims 4 is currently in development and scheduled to arrive in Fall 2014, and Sims fans are surely looking forward to a new game in the series considering The Sims 3 will be well over four years old by the time next Fall rolls around. Fall 2014 is still a long way to go though, and The Sims 3 Into the Future is a great expansion packed with enough content to help hold players over until the next game releases. 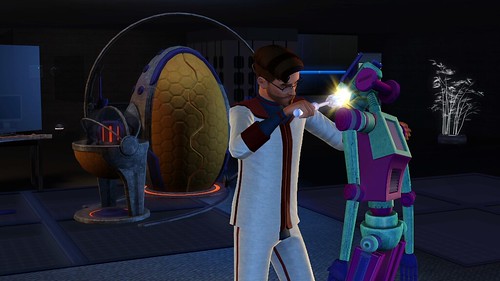 Players will enter Oasis Landing by starting a new game typically. Soon after loading up The Sims 3, a strange Time Portal will appear around the Sims home, and a time traveler exits and offers the character the ability to travel between times and worlds to Oasis Landing. The player is free to travel between the two worlds, but actions performed in the past can affect what happens in the future world of Oasis Landing. There are three distinct futures available in The Sims 3 Into the Future, but players will begin in the neutral future where everything looks nice and the people are even friendlier. Players can head back to the past and the normal Sims world by heading back to the teleporter than transferred them to Oasis Landing in the first place at anytime they want though.