During today’s EA Q3 2014 Earnings Conference Call, EA revealed information about the finances behind the upcoming title “Titanfall“, and explained how said expenses and revenue have been arranged along the way, and going forward. Titanfall is set to release on March 11th of this year, and is also expected to be an “additive” to EA’s 2015 fiscal year that begins April 1st, 2014.

Beginning April 1st, 2014, EA will begin sharing royalties with Respawn, and needs to begin building up revenue and a higher profit margin. To achieve that goal, EA announced their decision to push The Sims 4 out of FY 2014 in the Q2 conference call.

The Sims is a title that can be shipped almost anytime in the year. The Sims 3 was shipped in June 2009. It can ship in the summer, in the winter, in the fall. It’s a title that have a huge following and we can always continue to develop, because much of that title is based on not just the base title, but also expansion packs. And so we’ll use the additional time to continue to develop greater expansion packs and the product.

Second, The Sims is a high-margin product, because it’s wholly-owned IP. Titanfall is obviously a product that we share the revenues and profits with Respawn. But as any of our developed titles through our partnership agreements,we typically invest in the title and expense those costs along the way.

And so for the year, the profitability of Titanfall is similar to The Sims, because we’ve already expensed the bulk of that R&D. And thus, the trade-off in profitability is equal, and we’ve found that it was a good time to shift one for the other. And so, that’s the quick story and we’re extremely excited about both Titanfall and The Sims, but we think it’s going to help make not just this year, but next year very, very strong.

EA determined that the trade off with The Sims 4 was even in profitability, but only now released details on how the decision impacts their profit margin. EA will enjoy a high profit margin during the first weeks of Titanfall’s release, and then will retain a lower margin once they begin sharing royalties with Respawn.

Long story short, Titanfall did indeed play a role in The Sims 4 being pushed out of the early months of 2014, but one would assume it’s not the only reason. Just today, SimGuruGraham announced that music recording for The Sims 4 CAS is set to begin in March, so it is safe to assume more development time was needed to ensure the game did not come out half-baked.

While we wait for the official transcript of this call from EA, here is a mini-transcript I put together by listening to the webcast. The text below will be replaced with the official text once it is available.

Investor: Given Titanfall is going to be the first major new franchise for next gen when it launches in March, just in general, how are you thinking of forecasting that title in your March quarter outlook? Would you tend to describe your approach with Titanfall as aggressive, conservative, or somewhere in between?

Electronic Arts: I guess I would call it conservative. As a reminder Titanfall is only on Xbox One, Xbox 360 and the PC, and so by that nature, its smaller as a overall product. We are very excited about the product. Respawn has done an amazing job with it, but as a reminder also, we’ll be shipping it tale end of the quarter (middle of March), and so essentially the March revenue (quarter revenue) is primarily the first sell in of that title.

We expect the title to be very additive to us also in FY15, and you’ll here more about it when we give our ’15 guidance, but its starting point in Q4 this year and it will play well into next year as more and more people build the base of Xbox One, or play the game on 360 and PC.

Investor: And that exclusive that you mentioned was the other question. Obviously leaving out the PlayStation impacts the stressful market to some degree, and I realize you can’t talk about specifics of the economics around your deal with Microsoft on there, but can you just talk conceptually about whether or not the economics are enough to offset potential sales if the game would have been on Playstation or high level on how these deals work.

Electronic Arts: I think you should assume that we made that decision back a few years ago when we decided to go exclusive. We looked at the forecast then on where we thought both Xbox and PlayStation would be, and we’re still very comfortable with the decision we made.

We told people last quarter (Click here for the Q2 Transcript) that it’s a trade off between The Sims 4, which is the product we moved out when we moved Titanfall in, and the reason it’s economically neutral on that deal in this year is that most of the expenses for the development of Respawn’s product were expensed along the way.

The initial shipment as a volume that we’re anticipating as built into our guidance are fairly profitable, and we determined it was an exact trade-off with The Sims 4 profitability that would have been in that quarter. 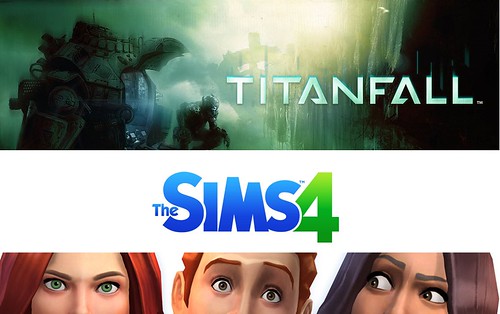