Today we familiarize ourselves with another new Voice Actor for The Sims 4. Krizia Bajos is a Cuban-American actress who has appeared in dozens of commercials, games, several films and TV shows such as: “How I Met Your Mother,” “Kath & Kim,” “The Young and the Restless,” “Franklin Bash”, “Halo 4,” “GTA V”, and more recently The Sims 4.

According to her Twitter, she is fluent in “Simlish”, and has been working on The Sims 4 since October, where she spent 3 days straight recording Simlish. 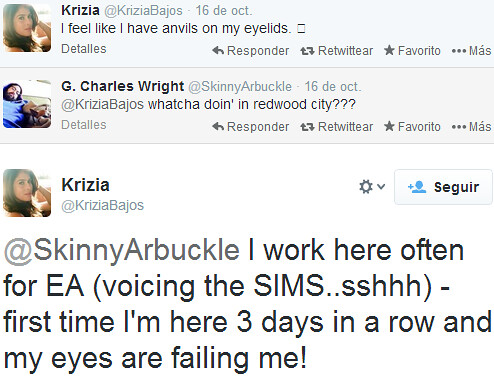 You can learn more about Krizia and her work via her website, and even check her out in action via her YouTube channel. Krizia is the 3rd confirmed voice actor for The Sims 4, along with Scott Whyte and Cia Court.