Polygon: Multitasking in The Sims 4 | SimsVIP

A sim’s ability to perform more than one task at any given time helps make the character feel more natural, according to software engineer Peter Ingebretson during a recent Game Developers Conference 2014 panel.

In “Concurrent Interactions in The Sims 4,” Ingebretson explained that Maxis’ goal with the upcoming game was to make it “the most natural iteration” of the series. Part of this required implementing one of the series’ most frequently requested features: multitasking.

“When we looked at the sims and tried to decide what would make them feel more natural and more believable, one thing that we realized is that in the real world, people do things at the same time all the time,” Ingebretson said. “For instance, people stand around in a bar drinking drinks, sitting down. Sometimes people will stand and sit and talk to each other. It seems very natural when characters in a game can multitask.” 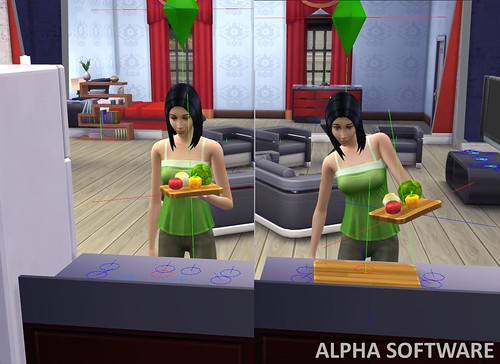 According to the software engineer, multitasking gives the illusion of doing several things at the same time. It requires less complex demands than actually doingseparate, simultaneous behaviors.

“It also turns out that it’s in some ways realistic,” Ingebretson said. “In the real world, people’s brains work this way. There’s a lot of psychological research that shows people multitask by switching between different things.”

Multitasking, however, can be inhibited by several technical of the game, such as how the sim is positioned or what they’re doing with their hands — this could keep a sim from drinking a soda, for example, or change their options when sitting or standing.