German magazine Games Aktuell, has published a new Sims 4 Build mode preview, where they confirm Pre-Made homes and the ability to sort homes by style.

Big Thanks to Crinrict for providing the translated article. 🙂

The Sims 4 Preview: Playground for house builders – Everything about build mode

Sims 4 has a brand new build mode which is supposed to make it really easy to build your picture-perfect home. Fake or Fiction? We visited the developers in Redwood City in California to find out. In our Preview you’ll find new details. We also have some new screen shots for you! 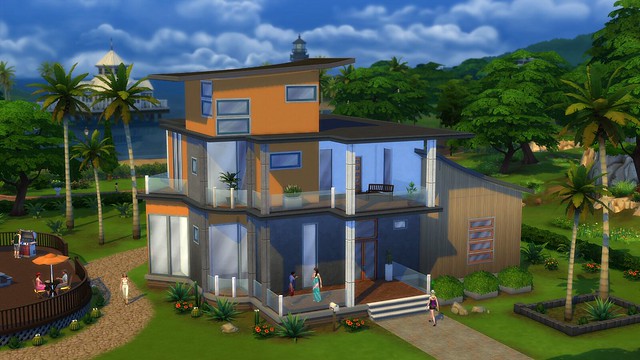 This makes the amateur awe and the professional builder is surprised. The new build mode in The Sims 4 lets you create bold roof constructions like this one [Source: Electronic Arts]

Preview of the Sims 4 build mode: There are at least two groups of Sims players: Those that love to build the most exceptional buildings of all times and those that that think of building as a necessary evil on their way to play the Sim simulation. The new build mode in Sims 4, which we were able to try during our visit with EA, is supposed to give both groups more fun with the game. Aaron Houts and John Berges were our architectural tutors on the virtual Sims 4 construction site. Both were overflowing with information.

My room has 4 walls

Build mode has become a lot smarter. „The game now knows that walls, floors and ceilings belong together to form a room“, John Berges explain, “you can also change the size of the room however you want instead of a chosen from few given forms.” Behind the curtains, the room realizes that it borders another and reacts accordingly. The designers put a deck in front of the living room and the outer wall adjusts to that dynamically. For the first time in a Sims game, you can now have round decks and railings.

The digital helper is completely optional. You can pass on the predefined room geometrics and build your walls manually where you want them. This is supervised by the build mode in the background nonetheless. If you build a rectangle with four walls, it automatically adds a floor. “You can also just add an extra wall and make two rooms out of one”, says John Berges.

Once you’re done with the shell construction, it’s time for the finishing touches. To add windows you don’t need a glass worker anymore: We can add 14 windows with only two mouse clicks – all of them with the same spacing to each other. Individuality is still possible though: “For the first time it’s up to place the window vertically where ever you want”, rejoices Berges. This way you can have windows that ascend alongside stairs. Outer walls are decorated with bricks and columns and on we go to build the roof.

Up till now this was a rather painful task since there weren’t many possibilities to individualize your roof. The 4th installment changes that: “You can now curve and move your roofs in any direction you like and not only change the height”, says Berges. Indeed: We pull a pointy gable to a round one, press the outsides together and then fold the endings downwards. That’s all that’s needed to make a roof which you probably have seen on a barn or a factory before. You can even have different roof forms on the same house if you choose to do so. We were able to try that out as well. 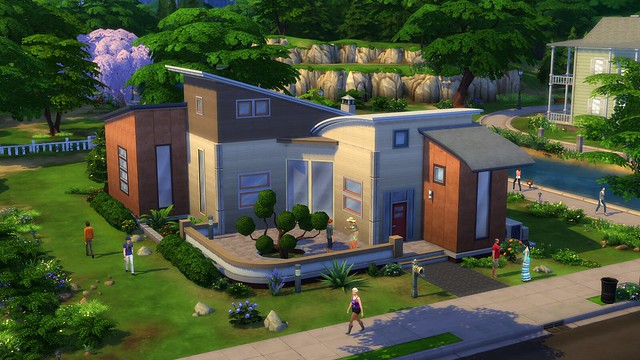 Round railings and windows in different heights: Sims 4 has many new details which fans have wanted for a long time now. [Source: EA]

Make a house a home

Even if the house is now ready for occupation the interior furnishing is a great task for many players – on not only for the player or there would not be an occupation called interior designer. But no fear – because of this you can now find model rooms which you can choose from as your heart (or purse) desires. “This is as easy as painting by numbers”, grins Aaron Houts. “Or like flipping through an Ikea catalog”, John Berges offers as another comparison. And they are right: The rooms, which are offered in different color combinations, are so full of atmosphere that we pass on puzzling together our own furniture and decorations. Instead we choose the dark-reddish rooms.

If we change something in our house, the furniture adjusts automatically. You don’t like a wall ? Delete it. The pictures – which can also be changed in height are automatically added to our inventory. By the way, if you have a non-creative day, you can choose from the model houses the developers have already created. You can even sort them by architectural style like if you only want Victorian houses to choose from.