Via The Sims 4 Forums

Angellulu asked:When you say we have a loading screen between lots, does it mean that when I would travel my Sim from home to lot that is included in the same neighborhood, he/she still has to go through a loading screen? What about the lively streets, can we be part of it, or is it out of reach? I’d like my Sims to walk on street outside as well, even if it is out of bounds from other lots. Will this happen? I wouldn’t want to be confined in a single lot, watching every other Sim have fun outdoors…


Graham replied: There is never a load screen when you walk off a lot into those public spaces in the neighborhood that you’re in. By all means, have your Sim run out there and have fun! Every Sim you see at any time when you’re playing can be reached and interacted with without any loading whatsoever.

You will need to load when you walk onto a different lot in the same neighborhood than the one that is currently your active lot. When you arrive there, that lot will become the active/loaded lot with Sims on it doing stuff, and all of the Sims who were in those public spaces in the neighborhood will still be there doing the same thing they were doing before you switched lots. Because time continues to pass while you’re off in different neighborhoods, and Sims continue to simulate even when they aren’t loaded, when you travel to a completely different neighborhood and then return to the first neighborhood, the Sims who were there previously will have changed. 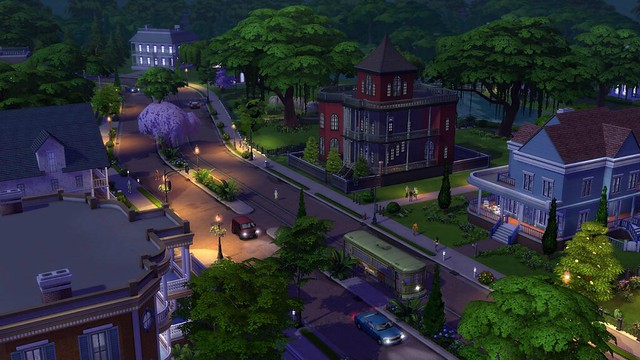