In the 4th issue of The Sims Official Magazine, it was stated that clothing items would include a “price tag”, and that Sims would have to “purchase” the more expensive items when they had enough money. Below is a screencap of the section in the magazine, which clearly implies Sims will have to purchase clothing: 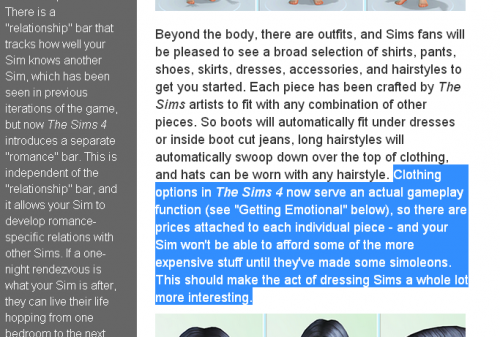 The official magazine is a 3rd party app with EA approval and oversight, so that leads me to believe that anything coming out of the magazine should be valid. Today, SimGuruSarah took to Twitter to announce that Sims will not be able to purchase clothing in The Sims 4, and I’ve replied asking for clarification between her tweet and the magazine. Now we play the waiting game.

@PaulinaKlepacka No, you cannot buy clothes in The Sims 4. All clothes will be in CAS like The Sims 3, or will be unlocked via gameplay.