When we last left our intrepid Legacy Family, Lady Cheshire Masque had just found out she was pregnant. But let me back up for a moment. How did she become pregnant?
Well, if you haven’t had the birds and bees talk, you may want to ask a parent. (On a side note, there is a child-to-adult interaction called ‘Ask about WooHoo’) 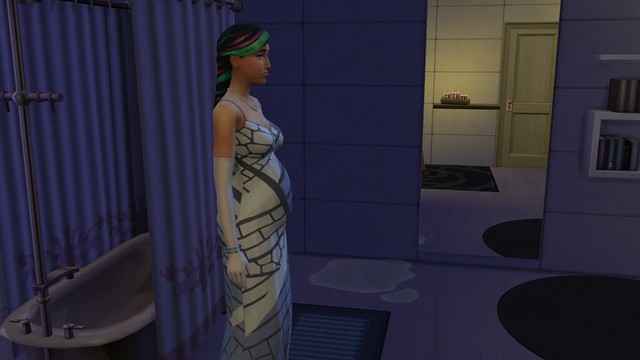 Yes Woohoo and its cousin Try for Baby are back as you would expect them to be, but with a little twist. As soon as they were married, I had Lady Cheshire and her new hubby trying for baby…except I didn’t get hear a baby lullaby announcing the pregnancy. They were both too tired to try again and went to sleep. The next morning when I had Lady Cheshire use the toilet, “Take Pregnancy test – $15″ became a new interaction. I had her take one and it came back positive! It wasn’t until she took the test that she got her positive “I’m pregnant” moodlet. So the pregnancy jingle is gone. You gotta pee on the strip to know for sure now. Another twist is that they’ve changed up the mood effects.