Official Blog: Being a Detective in The Sims 4 Get To Work | SimsVIP

We hope you enjoyed last week’s blog, taking you through a day in the life of a doctor in The Sims 4 Get to Work and all the drama that can unfold.

This week, we take a look at the Detective career. Check out our latest video:  The Sims 4 Get to Work: Official Detective Gameplay Trailer.

And now, time to jump into the world of Tate Rackett, a young detective trying to make a name for himself with the goal of becoming the Chief of Police someday. 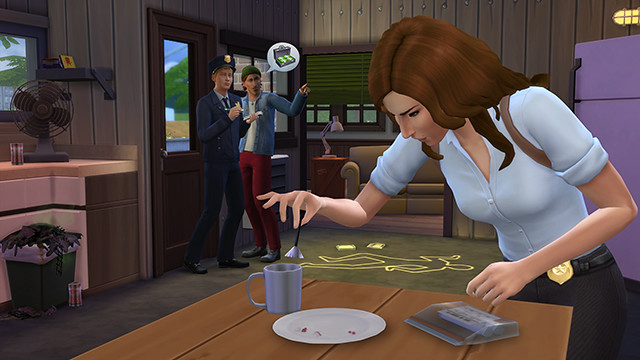 The day begins with a 4:00 a.m. wake up call. It’s a cold morning, pitch dark outside. Detective Rackett grabs his badge and cup of coffee – black – and heads to the crime scene for his case: a popular club which suffered some suspicious fire damage the night before. He arrives at the location and starts to survey the area. This isn’t the first case of its kind in the last week. Rackett is waiting for the criminal to slip up and leave the defining clue that will help him solve the case. Perhaps today will be the day.

Finding the Sim behind this series of crimes is not just another case for Rackett, it’s personal. 15 long Sim days ago, Rackett lost his friend is a tragic fire – somehow he had been trapped in a doorless room and just couldn’t be saved.

Rackett takes a closer look around the crime scene and discovers some items that he dusts for fingerprints. He takes a few evidence samples and is about to head to the station when he feels a tap on his shoulder. He turns to find an attractive, blond Sim in athletic attire – his first witness.

She was out for an early jog that day, just before her early start at the hospital. Rackett gathers all the details and races to the station, and his fully equipped crime lab. He runs all the evidence through the Chemical Analyzer. He’s hoping to find any missing detail about his suspect.

It appears the suspect is male, adult and athletic, corroborating the eye witness’s story. Rackett pulls out his phone and issues an APB.

Rackett finally receives the message that could end this mystery. They’ve found someone matching the description in the local park.

Realizing there are dozens of Sims in the area, he starts questioning them one by one, hoping someone can point out the suspect he’s looking for. He has to be sure. Last week he arrested the wrong Sim, and was pretty embarrassed by the whole situation.

Just then, he sees out of the corner of his eye, a Sim doing push-ups. It’s the prime suspect and it’s time to make the arrest. 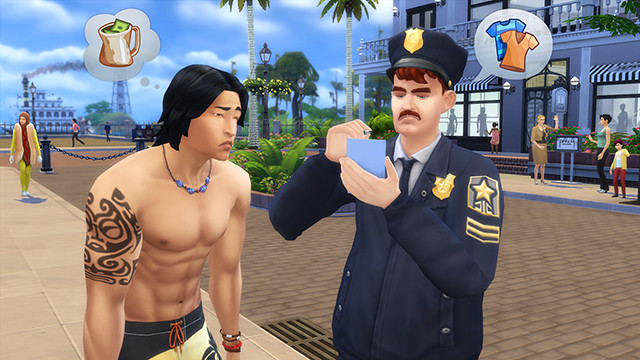 Back at headquarters, Rackett ushers the suspect to the booking station to search him, take mug shots and finger print him. It’s been a long time coming, but Rackett wants to make him squirm. He locks him up in a cell and leaves him. He heads upstairs to pump some iron, eat a snack and kick back for a bit. When enough time had passed, he enters the cell and brings the apprehended suspect to the interrogation table. He uses all of the tools at his disposal – he starts as the “Good Cop,” eventually turns into the “Bad Cop,” and ends by showing the suspect all the evidence against him.

It works. The suspect confesses. Another case closed.

It’s been a long day and Rackett returns to his apartment to relax on the couch and enjoy sipping on his favorite libation, a Dim and Gusty. Another successful day as a detective in The Sims 4 Get to Work.

We hope you have enjoyed this peek at the Detective career. Next week, we will explore the amazing life of a Scientist. Stay tuned!

This April, your Sims will rule the workplace in The Sims 4 Get to Work Expansion Pack. You will control your Sims’ every action as they tackle three active careers, whether it’s saving lives as a daring doctor, solving crimes as a fearless detective, or devising inventions as a mad scientist. You will also be able to put your Sims’ entrepreneurial ambitions to the test as you create and customize unique retail businesses. Plus, there are new venues, more skills to learn, and the chance to befriend some aliens!