Welcome to “Creature Feature” by adventfear, where history and trivia is discussed on the various life states of The Sims series. Life states, at least in terms of Sims gameplay, are the creatures that can be seen as “unusual” or “abnormal” when compared to normal Sims. These include ghosts, robots, aliens, and werewolves among others. These usually involve special gameplay or gimmicks that one wouldn’t see when normally playing games in The Sims franchise.

You hear a bump in the night. Could it be the plumbob over your head spinning a bit faster than normal, or is it something far more sinister than player-operated mind control dictating your every action and relishing in the consequences you may or may not have brought upon yourself?

For this particular Creature Feature, I am going to discuss my particularly favorite Life State in any Sims game: Aliens. Aliens are the strange, mysterious types of Sims playable in nearly every game in the main series, with the only exception being The Sims, released in February of 2000. Despite not appearing in the first game, however, they still had a presence in which they would abduct your Sim if they used the telescope for long enough. The telescope first appeared in The Sims: Living Large expansion pack, the first expansion for The Sims and the entire series in general, in August of 2000.

The Sim’s motives would be altered and shifted in the time they were gone, and eventually the aliens would drop them hours later after a variety of unseen circumstances lead the poor abductee to become shaken, stirred, and unsure of what just happened. Despite this, the Sim would have no severe ever-lasting consequences of being pulled into the sky by a beam of light by a mysterious stranger from beyond the stars, as one would generally expect. But that would all change when the next game in the series came out.

The Sims 2, released in September of 2004, had aliens in a game for the first time in the series. Not only were they playable, but  they also were integrated into the lore of the series via the story of Bella Goth. Bella is one of the more famous Sims in the franchise, perhaps in no small part due to her mysterious vanishing in the second game. The story of The Sims 2 does not state specifically what happened to her, but the memories of her husband Mortimer Goth and daughter Cassandra do indicate that she was abducted by aliens, and many rumors persist that she was taken by them off the roof of Don Lothario’s house in Pleasantview. Aside from the lore, aliens are a prominent gameplay feature in the game. Sims using the telescope could be abducted and taken off to who-knew-where for a few hours and returned. 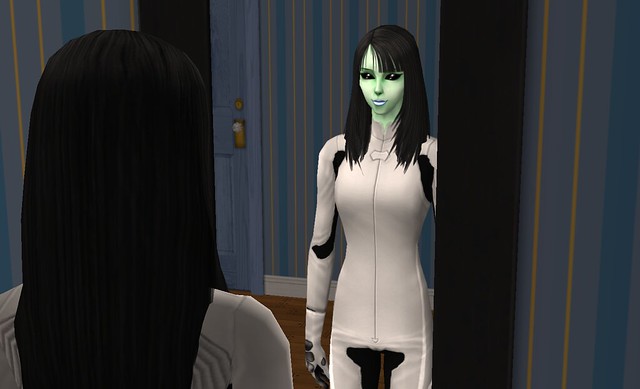 Returning Sims in most cases would only have the memories of abduction but, sometimes, male adult Sims would come back “pregnant”, carrying the alien baby to full term. Another way Sims were implanted with an alien was for them to use the Electro-Dance Sphere in The Sims 2: Nightlife. The sphere would pull them into a dimensional gate and they would come back with a chance of being pregnant. Once the baby was born, however, the gameplay between aliens and normal Sims was similar, with the only difference being that the Sim would grow up with green skin and black eyes. The more prominent gameplay changes for the life state wouldn’t come until the third game in the series and even then, players would have to weather the seemingly-endless storm of waiting for a certain expansion pack.

The Sims 3 was released in June of 2009. While the base-game came with playable ghosts for the first time (more on them in a future Creature Feature), it did not come with aliens. However The Sims 3 did come with three unorthodox skin tones: Red, blue, and green, with a variety of others released in a patch in September 2012. With a simple use of eye-based custom content, players could still make “aliens” as seen in The Sims 2, with the changes being merely cosmetic. Alien abductions weren’t even in the base-game, which was a first for the series. The presence of aliens were still felt, however, as the base game town Sunset Valley had a few things around it that hinted at aliens including a large stone piece of art that depicted aliens abducting humans. 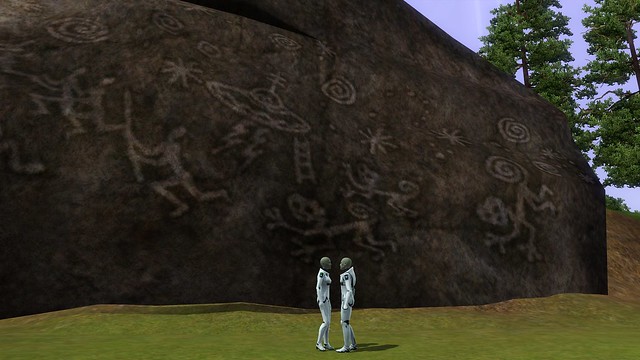 The rumors system integrated into The Sims 3: Generations expansion also had the occasional pop-up saying that “[Sim Name] is actually an alien, living in disguise.” Unfortunately when they were finally introduced, aliens could not disguise themselves as humans in a Sims game… yet. After four years of waiting, however, fans of the creatures from beyond the sky were finally given their due. The Sims 3: Seasons expansion was released in November of 2012, and brought with it all sorts of season-based content. The life state introduced in the expansion was, not surprisingly, the Alien! (PlantSims were introduced in The Sims 2 Seasons expansion… more on them in a future Creature Feature as well). 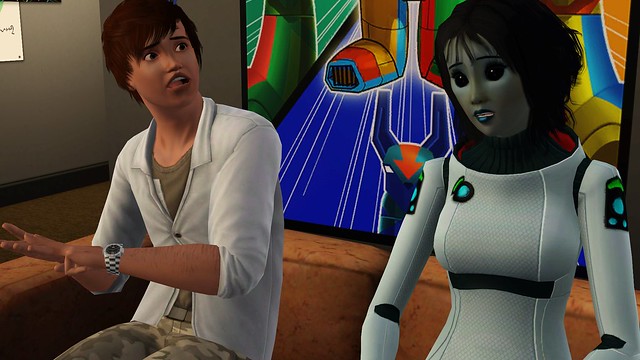 Aliens came back into The Sims 3 and they were given a serious upgrade compared to past iterations. They wore special suits, retained their black eyes, had a darker, more olive-green skin tone (released in the Seasons patch as well) and pointed ears (also released in the patch). Male pregnancy returned, with a special moodlet accompanying it called “mysterious weight gain”, and when the baby was born the player was given the option of returning the baby to the alien home world. Aside from that, aliens could also be added into the game via meeting them. On occasion, late at night, an alien would land on the world somewhere and start scanning items, or would land on your home lot to visit.

Befriending the alien allowed them to join the household and give the playeraccess to all their gameplay additions, in particular their UFO. Sims with UFOs were given the option to fly around town at light speed, upgrade it with laser cannons to wreak havoc on a community lot, seed clouds in the sky to create random storms, or upgrade it to travel off-screen to places such as the moon or the mysterious, unseen planet “Sixam”, which would surely never make its presence known in a Sims game after the third. Sims could also abduct their friends from around town as a prank, which some would see as a funny gag and others wouldn’t exactly want to be friends with them anymore. Aliens themselves came with a slew of different abilities in The Sims 3: Seasons, adding to the uniqueness of them in the game.

Aliens’ voices were also changed. While the voice selections were the same as normal Sims, they were run through a filter it would seem as they had a echoed-type vocal effect as they spoke, almost as though they were speaking into a metal box. Once aliens were playable, they could change their hair, clothes, and through cheats even change their face and body type. The fourth game in the series changed that aspect, but added a few special benefits as well.

The Sims 4, released in September of 2014, also did not have aliens in the base game. However, the wait for them was not as long as in The Sims 3. The first expansion, Get to Work, was released roughly the day or so before the time of this writing. It too has aliens, and unlike the past games, they can be made right within CAS. Many options are grayed out when selecting them, but there are a few additions compared to past iterations. 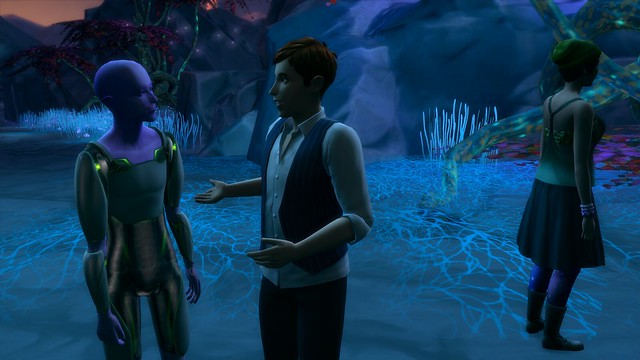 Aliens are deeply tied into the scientist career in the expansion, as Sims can invent a portal to their home world Sixam. They also have all the trappings of past Sims games, such as alien abduction and male pregnancy, distinct skin tones and eye colors, and… human disguises. Yes, aliens in this expansion can actually disguise themselves as humans and mingle about with other Sims, changing the disguise at will. In fact, any new Sim yours meets could actually be an alien in disguise, living in your town and even helping you at your job. Is your co-worker Jim a creature from another planet? The world may never know. 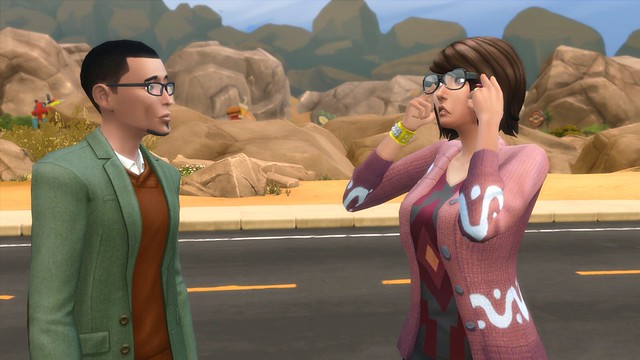 Well you could know, if you knew how to. For example, aliens in an extreme emotional state such as “very happy” and “very focused” start to glow with a slightly green aura. The three active careers released with the expansion also have their own special way of figuring out who’s who, in terms of the otherworldly who. Aliens could also start scanning your Sim with their brain which gives off their true nature as well. Aliens can also empathize with your Sim, developing the same emotional state. If players would want to meet with these creatures and not make them in CAS or not bother with trying to figure out if the friend down the street is a brain-scanning space-being, players can travel to the aforementioned world of Sixam.

By building a rocket or inventing a dimensional portal, Sims can travel to the alien home world and interact with them as well as collect special items for use in experiments and decorative purposes. Once you befriend an alien, they can be moved into the house just like every other past game, married, woohooed and tried for baby with (which may lead to both parents becoming pregnant), and the resulting children would be a genetic cross, with none of the aliens’ traits with the exception of the unique skin tone to the life state itself. 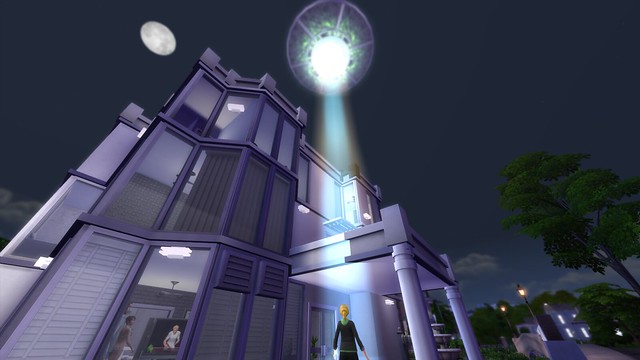 Aliens have been a presence since the beginning of The Sims series, and continue to make their mark on the game, and their gameplay makes them that much more unique than regular human Sims. One of the more consistently iconic images of the series involves a Sim being pulled into the sky by a UFO, and each game merely adds onto the original idea of the mysterious beings from beyond the stars.

Well that’s it for this Creature Feature. What mysterious, paranormal or supernatural being would you like to see the history of discussed on the next one?

(All images taken by user adventfear, in-game, with the exception of The Sims alien abduction image, which is from The Sims Wiki. User Late Night Latte uploaded it to that site)