Welcome once again to Creature Feature, where we discuss things that go bump in the night and absolutely no information is retroactively outdated at all due to patches. Nope. 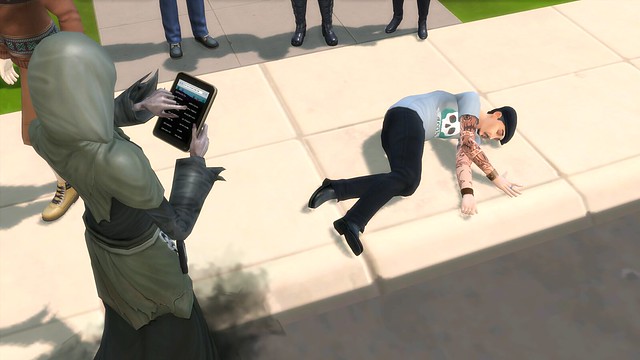 One of the more prominent aspects of The Sims as a series is the concept of death. It is only natural that death is part of a life-simulation game, even one as wacky as The Sims. This is because death, despite it being a fear of many, is a natural part of life. Strangely enough, death in The Sims is a very well-known aspect of the gameplay even to those who do not play the games themselves and the series is rather infamous in certain circles when it comes to “I just killed my Sims” [citation neede-wait, why? It’s common knowledge! Citation not needed]. Where am I going with all of this? Well, today’s Creature Feature will deal with life, death, and the afterlife. It’s time to talk about Ghosts.

My first discussion on this particular segment dealt with aliens, my personal favorite creature in any Sims game bar-none. But as you read in that piece, they did not make a presence in the first game. In The Sims, Ghosts were an element of the game, but they weren’t technically playable. If your Sim died, they would vanish from the game and leave behind a gravestone. On occasions, between 11:00 PM and sunrise, the dead Sim would float around the house, making spooky noises and intentionally scaring Sims. As mentioned before, Sims would simply vanish upon death but The Sims: Livin’ Large, released in August of 2001, gave players an NPC that would appear at the end of their lives: The Grim Reaper. The personification of Death first appeared in the expansion pack, and would appear in every major Sims-based release since with the same basic idea, sending Sims into the next world.

As you read about six or seven lines ago, ghosts weren’t “technically” playable in The Sims. However in the eighth and final expansion, Makin’ Magic, magical Sims could devise a special charm called “Shed Your Skin” to take on the appearance and gameplay of a ghost. This, of course, was only temporary and could only be used at night. A similar potion would appear later on in the series, but let us not get ahead of ourselves here. 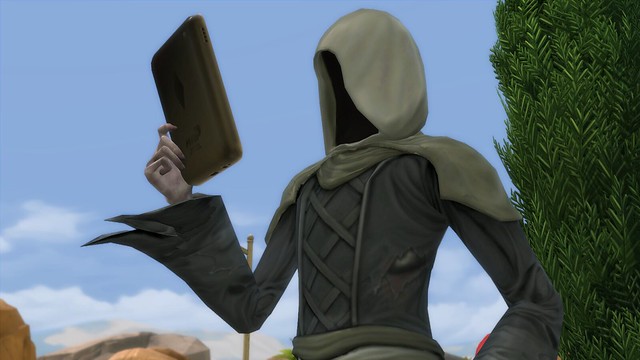 In The Sims 2, ghosts made their return in the base game, and again, they were not playable in the main series on the PC (more on that later). Ghosts appeared late at night and took on different appearances and interactions based around how they died. Red ghosts represent fire, purple for starvation, etc. Ghosts that return to the mortal world would also attempt to make up for what killed them. For example, a Sim that died of starvation would raid the fridge for food and get upset if there is no food. A ghost that died of fire would jump into a nearby pool or ocean. As with The Sims (and ghosts in general), ghosts could phase through walls. Additional interactions involved ghosts turning on electronics, making objects float, and generally just haunting households. Expansions added different ways for Sims to die, and as a result also added new ghost colors including green for death by Cowplant, and white for Vampire sunlight death, etc. (speaking of which, vampires will be featured in future piece).

While Ghosts were not playable in The Sims 2 on the PC, the console versions were quite different in that regard, and even then death was not exactly permanent. When a Sim died in the console version of The Sims 2, they would float around as a controllable ghost, and the Grim Reaper would hang around the lot to bring them back from the dead via either a chess match or a fiddle contest. The Sim would eventually win and come back as a living Sim once more. This could be seen as the first time in The Sims that ghosts were playable, a feature present in the next game in the main series.

The Sims 3 added ghosts into the base game and, for the first time in an official game, they were playable. Ghosts returned in either the standard “haunt the lot late at night” type of way or, through a special opportunity, could be made playable by bringing their remains to the science lab. The standard ways to kill a Sim returned as well, with hunger and fire being more common than not. Ghosts in The Sims 3 had special colors based around how they died as well, which increased with the many expansions the game had to offer. Of note was the Vampire ghost, introduced in Late Night, which represented a vampire who had died of thirst, with a red body and pulsating energy. In The Sims 3: Generations, a potion was added to the potion table that allowed Sims to briefly become a ghost but, unlike the one seen in The Sims, it was able to be used at any point in the day. Genetics also worked for ghosts, allowing Sims to have a ghost baby with the same color as the ghost itself. It was usually the genetics of the father that passed on to the child, meaning the father would have to be a ghost, but a ghostly mother would increase the chances ten-fold as well. 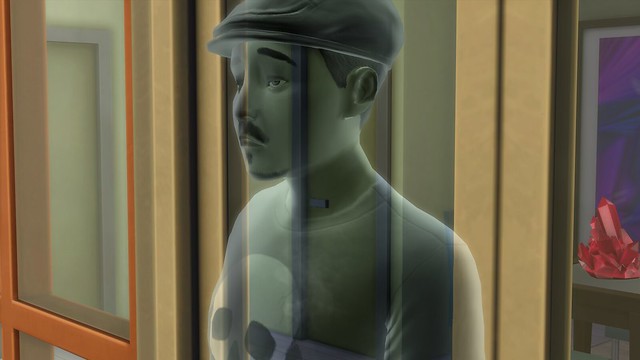 Ghosts would continue on to be a prominent element in The Sims 3, including as both a corporeal Sim ghost as well as a spiritual sprite in the Ghost Hunter career of The Sims 3: Ambitions, but The Sims 3: Supernatural changed many aspects of them, including an ability for a witch to cast a “Haunting Curse” on a Sim and have them be haunted by ghosts at any time of the day, which would go away after a day or two. However, Supernatural added in a major feature: The ability to create a ghost right in CAS. With a special Supernatural button in Create a Sim, players could create nearly any type of ghost from a menu, with the only unavailable option being the aforementioned vampire thirst ghost. The developers of The Sims 3 stated this was because those ghosts were exclusive to Sims who had died as vampires (although the Haunting Curse ghost was exclusive to a witch who had died, but their option was still available in the button). Ghosts were also prominent in graveyards during a full moon, and could be summoned into the household via a “Philosopher’s Stone” which could be gained as a Lifetime Reward Object, though whether Nicolas Flamel was involved in its creation is up for debate. The Sims 3 also contained one more element in summoning ghosts: fireworks. Using fireworks from any expansion or store set at a graveyard would make ghosts rise from their graves to witness it, at any time of the day. 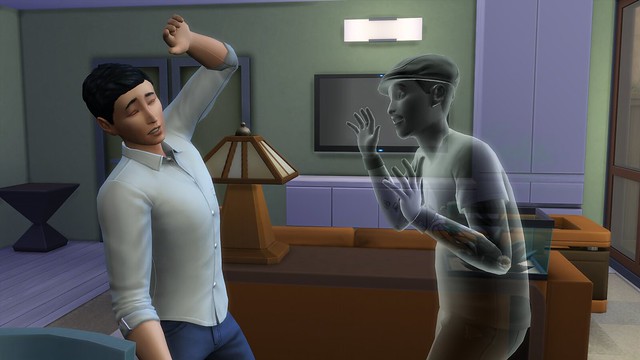 The Sims 4 was released in September of 2014, and it did not have ANY creatures or life states in the base-game upon release. However, ghosts did make an appearance on October 1st of that year as part of a free game patch. Along with the usual haunting at night, playable Ghosts in The Sims 4 had new interactions, such as being able to fly through Sims, possess objects at will by clicking on them (in The Sims 3, ghosts would possess objects and make them float, but this was autonomous and not a player-controlled action), and “ghost scare” Sims by vanishing for a few moments and popping back up. Sims could also ask the ghosts how they died.

Ghosts also changed color based on how they would feel at the moment, rather than how they died. A sad ghost would be blue, a happy ghost would be green, etc. But a returning trait from The Sims 2 allowed autonomous ghosts to act based around how they died. A Sim that died by fire would set fires. A Sim that died from laughter would make more jokes than usual and be playful, etc. The Sims 4: Outdoor Retreat game pack allowed for Sims to tell ghost stories around the campfire after 7:00 PM, and the result would end up summing a random gray ghost who would scare any Sims who came into visual contact with it. 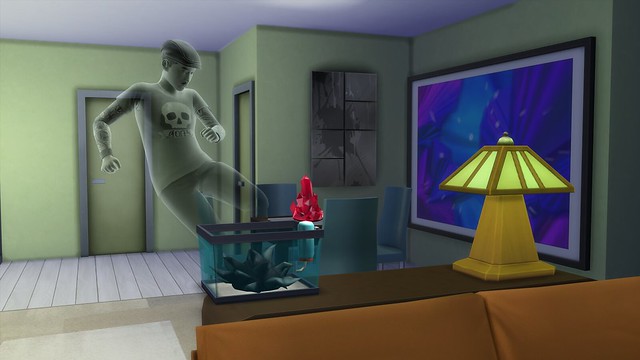 Seeing as The Sims 4 is in its early stages, it is difficult to predict what, if any, changes and additions to ghosts there will be in future patches, expansions, game packs, or even stuff packs. Patches in particular, considering my last Creature Feature on Aliens had aspects changed even since I wrote that due to them (but in this author’s completely unbiased, humble opinion, they were made infinitely better). So it is really up to the future to see what changes to those that lie beyond the graves.